This was a food and market tour, then cooking class, then eating. Our guide (Sherpa) was Simone, a German woman fluent in German, Spanish, and English. I bet she also knows a little French, Italian, and Portuguese. Writing this two days after the class, I don’t remember any kind of an accent, unlike so many local guides. She was also fluent in the local food and cuisine.

It was a small group, five in total; three Americans and two Norwegians. The Norwegians were also fluent in a couple languages. Writing this two days after the class, I don’t remember any names.

We met Simone at the south end of Calle Marqués del Larios (in front of “Women’s Secrets”; the women don’t seem to keep any more secrets than Victoria) walked west along Calles Marínez and Atarazanas, with stops to show small family owned shops with the best local ice cream, cheese, wine, bread, and (this is Málaga!) ham. Plus salted cod, which isn’t local but is imported from colder waters and consumed in vast quantities. According to our Norwegian friends, salted cod, like lutefisk, is not about the fish but about the accoutrements, ranging from butter to aquavit, and many things in between, unlike Minnesota church suppers, which don’t get beyond butter.

For a glass of wine, turn left on Calle Pastora, walk a block, and enter through some old wooden doors with no signage but many casks of wine inside. (This is when you need the “what3words” app; the three words are “improves.checked.quality.”) The local grape is Moscatel and the local wines are Muscat. There are, of course, sweet dessert/aperitif versions, but there is also a dry white that smells the same but tastes very different.  The actual name seems to be Antigua Casa de Guardia, founded by Señor Guardia in 1840.

Then we got to Mercado Central de Atarazanas. To best see the market, go about 11:30 on a weekday; to best experience the market, go early Saturday. Don’t expect much in the way of English, but pointing and letting them help themselves to your money works. “The traveler sees what he sees; the tourist sees what he came to see” (C. K. Chesterton.) Closes at three; closed on Sundays; no fish on Monday.

Entering through the arch, done by Mohammed V in the 14th Century, facing the stained glass, done by el Ayuntamiento de Málaga in the 21st Century, the meat and cheese were on the left; fish and seafood in the center; nuts, fruits, and vegetables were on the right. Tapas, juice, beer, and wine bars were sprinkled throughout.

Originally, the building was a ship yard (I think that’s what the name means.) It once was waterfront but now it’s about half a mile to the sea; it may be waterfront again in a few years.

We wandered through the stalls, met some of Simone’s favorite sellers, and picked up bread, Iberian ham, prawns, ground beef, and ground pork that we would need for lunch.

The meat section covered the gamut from very thinly sliced ham, measured in grams, to local sausage, measured in kilos, to young goats, in any fraction you want up to one. The fish could be anchovies, sardines, shrimp, crayfish, squid, salmon, whatever was plentiful today, and many, many things that say to me that some of our ancestors were really hungry at times. About a third of the fruits and vegetables, I could identify; another third, I had heard of. Countless varieties of olives and almonds. And don’t touch the produce.

The goats are also used for milk, which is touted to be unusually healthy even for goat’s milk, and the milk is used for cheese. All of these are special because the goats are special, “cabra Malagueña.”

They don’t waste any part of the animal, which makes the meat stalls fascinating. When did you last see the entire tail of an ox without the ox? Or the snout of a pig without the pig? There is actually quite a lot of meat on the upper end of an ox tail; free range are better than feed lot because they have to fend off more insects. No comment on why free range might be better for pig snouts. The price of ham is largely a function of how much of the diet is acorns.

A popular winter treat, primarily for breakfast, is zurrapa. While there are often some issues with translation (I think ‘ox’ can mean ‘steer’,) ‘zurrapa’ means lard and lard means lard, flavored with pretty much whatever you want or have. It has to be savored in winter because it melts in summer. Based on our experience with room temperature in February and March, that isn’t an issue yet.

While we were in the market with Simone, we were just trying to keep up with her explanations and descriptions. I expect to have pictures of the market tomorrow but in the meantime, here is Simone’s guide to the market, which has much more than I know:

Then off to class. Before cooking, we sampled olives and olive oils, along with a little ham, cheese, almonds, and bread. Bread is not so much for eating, unlike with the French, but for mopping up more interesting things like olive oil, pil pil, or almond sauce. Our Chef, who spoke no English, led us through four recipes, which I actually think I could do now. She demonstrated everything very thoroughly before she shoved something in your hand and pointed at a pot. Often her explanation in Spanish was much longer than Simone’s translation in English but we got everything we needed and it all worked well. 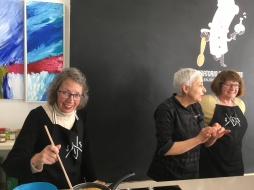 And we eat what we made; meatballs with almond sauce, potato omelet, pil pil shrimp, and bread

I think these links, thanks to Simone, will take you to the recipes we made, although the Chef thought the recipes were less important than does it look, feel, and taste right. There weren’t many leftovers.

Although we made a gazpacho rather than the mojete, which was alright with me. Mojete is a much more classic Malagueñan dish, but I’m still not a cod fan.