Based on the number of dedicated bike lanes, the lack of hills, and the behavior of drivers, we were on the verge of declaring Salt Lake City high on our list of bike-friendly cities. Getting around town by bike probably works pretty well once you figure out their system for naming streets and which direction is north. We didn’t figure out the system soon enough and our European GPS (i.e., ‘sat nav’) never did. It just couldn’t accept things like “North 830 West” (which is the ‘address’ of the trailhead we wanted.) Or the intersection of 100 South Temple East & 100 East Temple South, which may be the corner of Temple Square where you can find The Temple(s).

The three connected recreational trails we rode didn’t impress us. The Jordan River Trail was OK, but on the left were six-foot backyard fences and the right was (post positively) the River Jordan, parts of which were very similar to a drainage ditch. The Legacy Parkway Trail is a work in progress so it’s very smooth, very black, and sometimes mismarked (which at one point sent us down a mile and a half of gravel and another point a couple miles on the shoulder of a very industrial highway. Even on the right route, Legacy Parkway sounds good but is very much an industrial freeway.

The Denver & Rio Grande Western River Trail is much more scenic although straight, flat, and smooth. The problem here was, although one review we checked said few road crossings, we encountered many crossings. None was busy enough for traffic to bother us, but every one had two pairs of off-sets gates. While riders on half bikes could navigate most without stopping completely, that didn’t work with the tandem. Every few blocks, we came to a complete stop, maneuvered the bike through the gates, remounted, crossed the road, stopped, negotiated the other pair of gates, remounted, and reaccelerated. We gave up on the 24th set of gates. 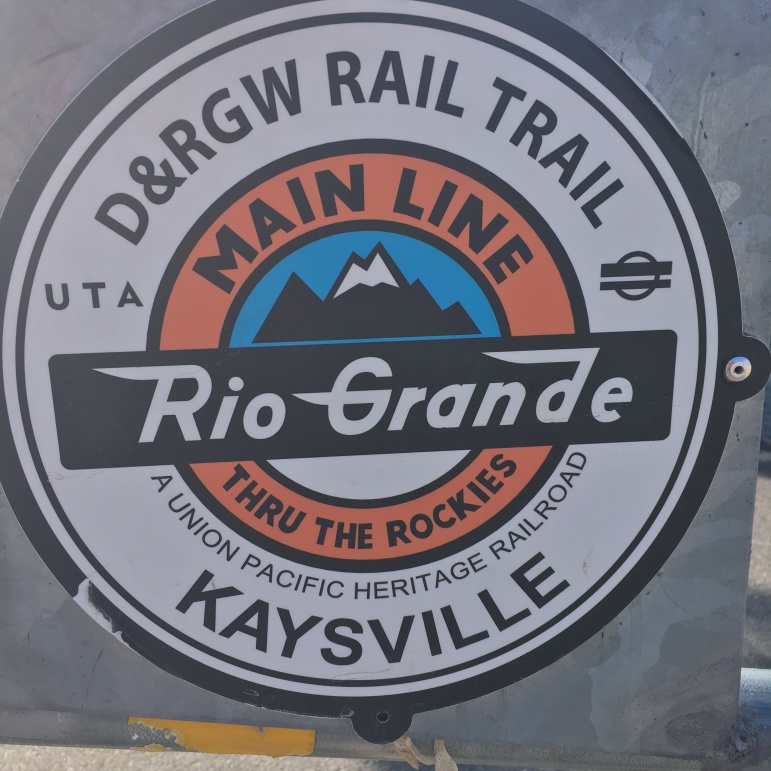 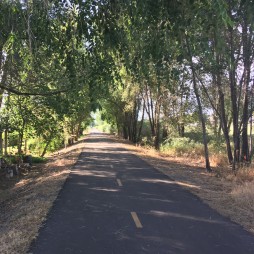 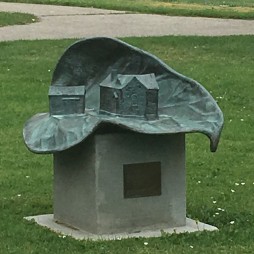 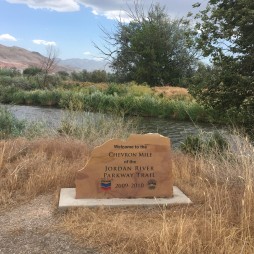 In spite of it all, we managed about 48 miles on what we thought was a hot day with temperatures in the 90s. Fortunately, we rode on the cool day; after that it got hot.

On the first hot day, we went to Temple. It has an organ recital every day on its world famous organ and it was impressive. Because we were planning a lot of walking around Temple Square and environs, Doré took the walker rather than just the walking stick. That got us a lot of attention from several very smiling young ladies and almost always gets us early entry and priority seating without standing in the lines. Because it was the 4th of July, there was a lot of John Phillip Sousa, America the Beautiful, and the Battle Hymn of Liberty. That last one, according to the organist, was a marching song for both sides in the Civil War (or the War of Northern Aggression, depending on who was doing the marching.) It sounded a lot like the Battle Hymn of the Republic to me, which is probably the Union version. 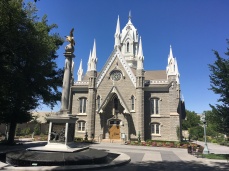 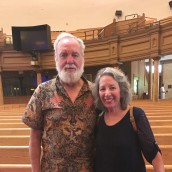 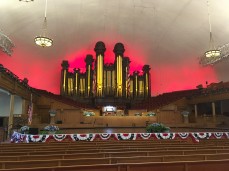 The building shown here is not the home of the choir, which was on tour anyway, nor is it the main temple, which is not open to the public, just very important men. The two interior shots are in the home of the choir. The outside is not very interesting but the acoustics are incredible. They started the recital by dropping a pin for us to hear. The other photo is Salt Lake’s version of Nicollet Mall.

We didn’t go into the main genealogical archive but based on a very basic search starting with name and date of birth, most of my ancestors are from the British Isles (everywhere and anywhere in the British Isles). Western Europe was heavily represented but also a couple places in Scandinavia plus Madrid and Rome. It seems I am 100% Euro-American.

Someone once said (I may look up who later) that the art of teaching is simply arousing curiosity in students for the purpose of satisfying it later. Some of the ‘educational’ material around Temple Square certain aroused my curiosity, although came up short on the satisfying later part. For example, the US Constitution was divinely inspired and God’s Kingdom on Earth will be realized when the USA officially becomes a theocracy under the Church of Later Day Saints. Mitt Romney’s election was supposed to be the first step in that progression.

(My first reaction, which was too flippant to inflict on smiling young ladies, “If it was divinely inspired, why does it need an article on amendments?”)

(Actually, that was my second reaction; my first thought was the US Constitution and theocracy are complete opposites.)

I do agree that our founding documents were inspired but they were primarily inspired by (and often plagiarized from) the Eighteenth Century writers of the Western Age of Enlightenment. If those writers could be lumped under a single heading that heading would be “humanist.” Note I didn’t say “secular”. If those writers, both European and American, had a single concern about the future of humanity that concern was governments becoming theocracies. And the means to prevent that was strict separation of state and church, universal education based on ‘reliable’ knowledge, and recognition of science as the source of the most reliable knowledge. And those Enlightenment principles are the first principles of our founding documents. (Although we certainly aren’t making much progress toward achieving them.)

(When talking about the two scientists in the band (Jefferson and Franklin),  the label “secular humanist” probably fits.)

Our other Utah stop was Moab, as in “a far place”. We went there for the Arches and Canyonland National Parks and the Dead Horse Point State Park. The scenery was everything we have come to expect. And our Golden Age Passport has paid for itself many times over. 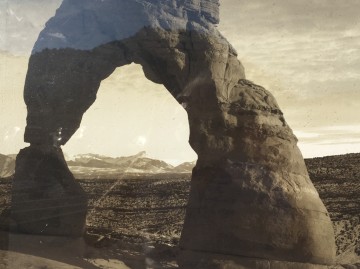 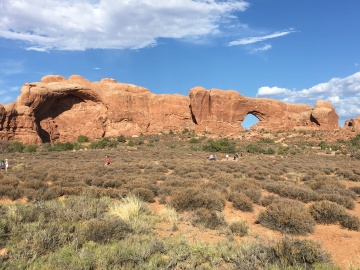 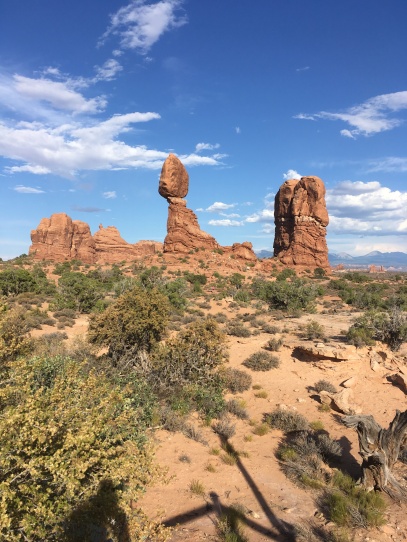 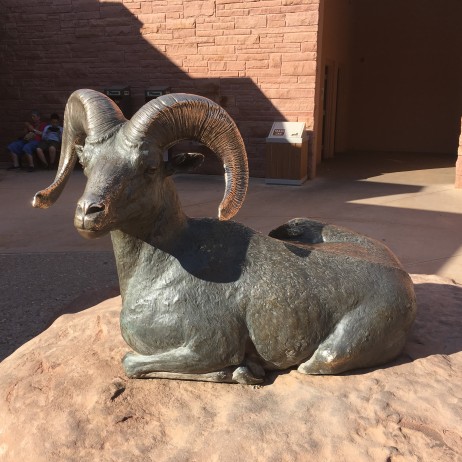 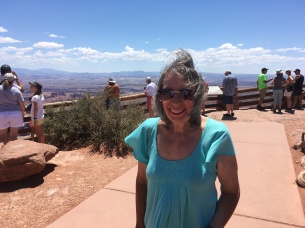 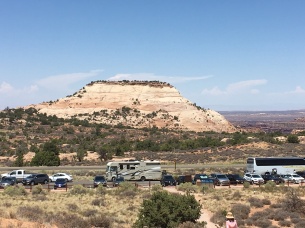 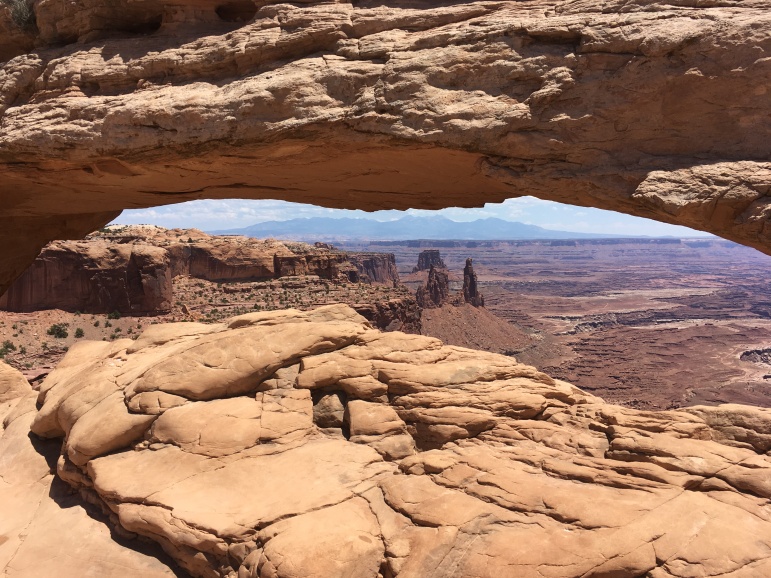 Dead Horse Point is so named because of the practice of driving wild horses unto the mesa, blocking off the narrow neck, picking the horses you wanted, and leaving the rest to die of thirst.

The only Big Horn we saw was made of bronze.