You may need to look at a map to understand why we went from West Virginia to North Carolina to Virginia on our way west. That still may not explain it. 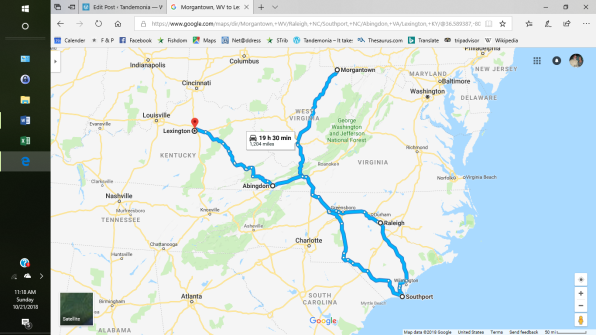 The Virginia Creeper is a five-leaf ivy, in the grape family. There are sites online telling how to grow it, how to get rid of it, and how to treat the rash. I don’t know why they named the trail after it but there are also the White Oak and the Rhododendron Trails. Or maybe given the grades and the twists and turns, “Creeper” may be describing the train ride rather than the plant.

This is rail-to-trail trail with a gravel surface, sometimes used by horses. Horses are not necessarily compatible with bikes and, like snowmobiles, do not necessarily leave the smoothest trail. It would have been a challenging railroad to build; now its challenging to ride. Originally, allegedly, there were 100 trestles. About half are still there; where the other half used to be are some steepish climbs. 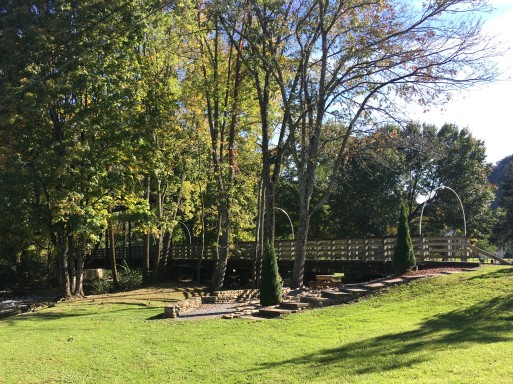 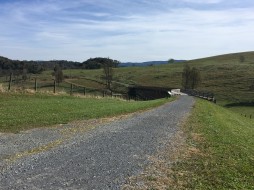 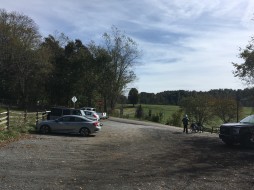 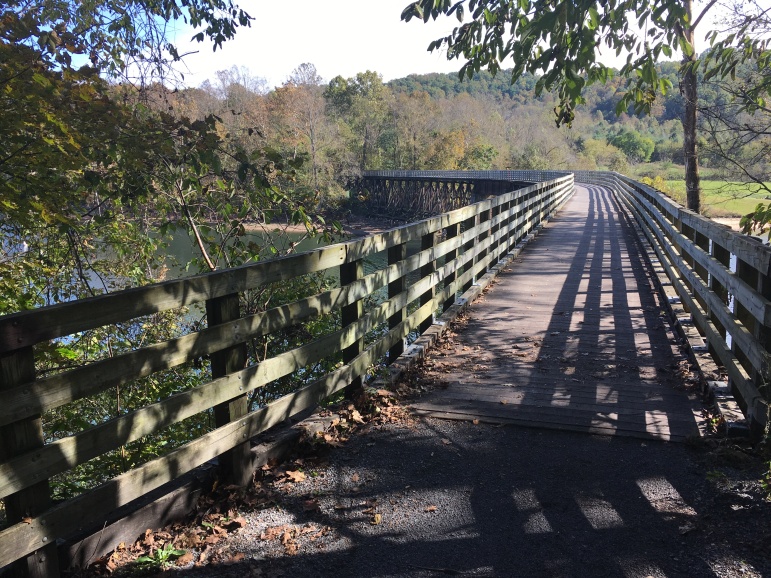 Did I mention that the center of trail, between Alvarado (pronounced al va RAY do, like it was in Texas) and Damascus, is about 1,732 feet elevation and the trailhead at Whitetop is about 3,645 feet. Because we parked at the low point and biked up on the way out, this wasn’t our “Road to Damascus”. The actual road leading to Damascus is called the Jeb Stuart Highway is these parts.

I have on occasion complained about the barriers they keep putting up, presumably to keep the ATVs and four-wheel drives from tearing up the trails. This trail added a new wrinkle, which was cattle gates. They were easy to open and self closing, but sometimes self closed on our back side before we were ready. The self-closing mechanism was quite clever, generally consisting of a rope tied to the gate and to a tree with a rock hung in the center. 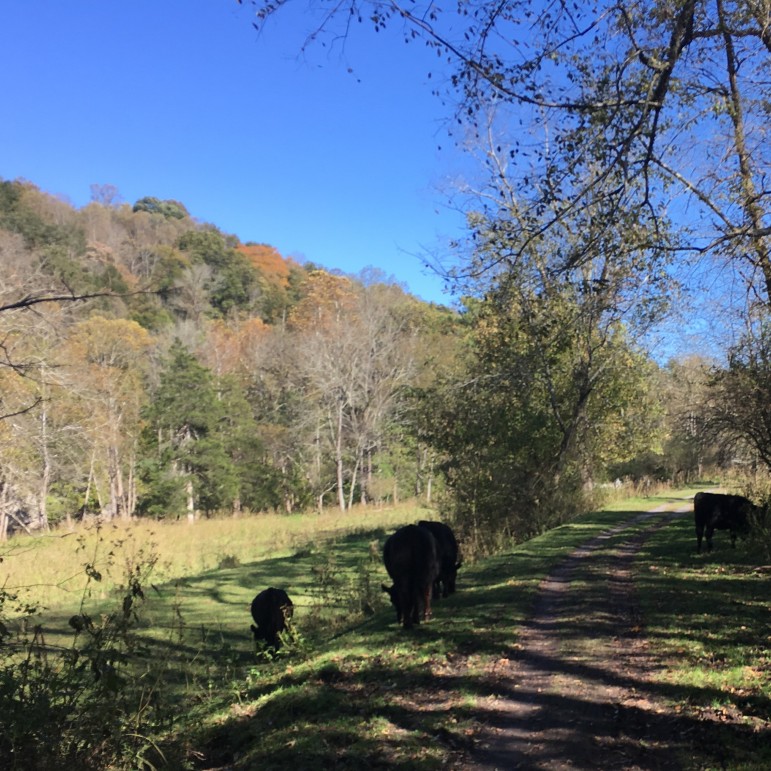 Cattle on the trail on their side of the gate 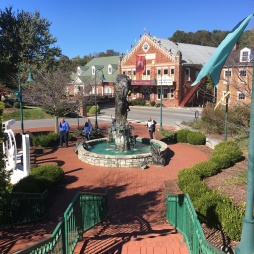 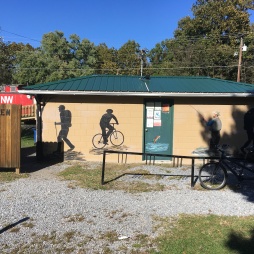 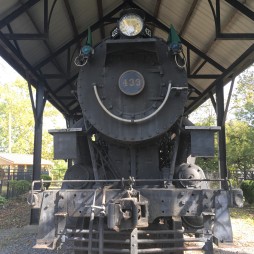 They weren’t too much of nuisance and the cattle didn’t think we were a nuisance at all. They didn’t look up. The street art, across the street from the Historic Barter Theater, called “Midsummer Play”, was inspired by “Midsummer Night’s Dream”. Once there was a train depot every few miles. Now some of those are actual towns. Some retained the depot’s name; others not. (Alvarado was once Barron’s Depot.) Others are not much more than a Royal Flush, Jobsite Johnny, or Porta-Potty.

The trail-themed restrooms happen to be at the Damascus.

The weather was chilly, particularly in the deep shade. We didn’t go all the way to the North Carolina border, so we only crossed 36 of 50 or so trestles. And we only did about half the 2,000 foot elevation change. The surface kept our speed down, more so than did the grade. For the most part, it was smooth, hard-packed, slightly damp dirt of some sort. That should be fast but it had enough embedded rocks, hiding among the leaves, that we kept getting bounced around. Plus the transition from trail to trestle was, in many cases, a serious discontinuity. 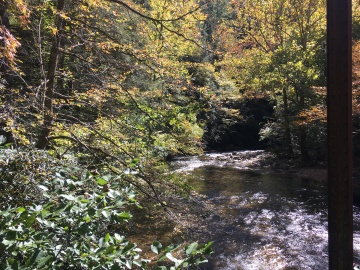 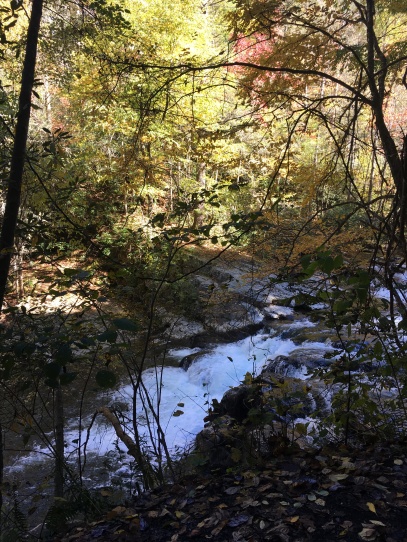 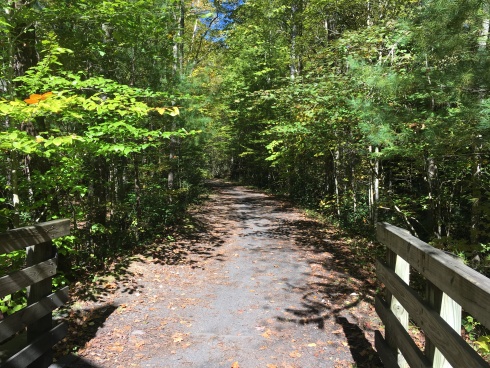 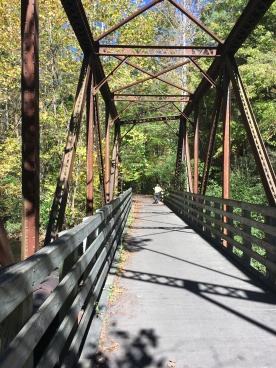 The weather was chilly but sunny; the trees have made a good start on fall, the river was babbling happily, and there was a restroom every half hour. What more do you need?