This automobile museum is approaching world class quirky. It is number 1 on TripAdvisors list of things to do in Málaga but we had put it off because we’ve seen other car museums. Doré was thinking, Why? This one is different. When we walked into what I thought was a museum about cars, the first thing we encountered was a room of designer dresses.

The name translates as ‘Automobile and Fashion Museum.’ Eventually, we saw plenty of cars. And next to every car was a designer dress that the best dressed woman of the time would have worn or wanted to wear. It seemed an odd combination but, upon reflection, a clever strategy: men could spend all the time they wanted looking at cars because women had clothes to look at. Or vice versa. (We might discuss if that is sexist, but its validity as a generalization is less debatable.)

Then once in a while they threw in a display with an environmental message. This is another odd combination with automobiles. The display pictured at the top is entitled “Hope.” Their description of it is: “This vehicle invaded by nature represents the idea that destruction caused by humans is not irreversible. Nature always ends up appropriating the space that was formerly occupied by human beings. The dream of a greener and cleaner planet is not yet lost.”

I think there is little doubt that life will continue on this planet for another four billion years; but that begs the question, “Do Homo sapiens fit into the picture anywhere?” 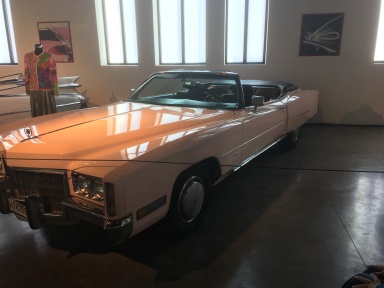 Elvis collected pink Cadillacs but while this isn’t one of his, he might have had one like it. The clothes look more Mary Kay than Priscilla.

None of the cars exhibited was the famous one. The descriptions often said things like Jack Benny had a Rolls like this. Or James Bond’s Aston Martin began as this model. Or, Prince Rainier picked up Grace Kelly in a car like this before the wedding. And, my favorite, Ingrid Bergman would have liked a car like this.

In the middle of it all, there was a room of hats. And in case you miss it, these are pictures of hats. 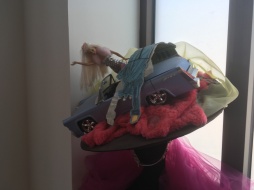 There were old cars, truly classic cars, and cars that never quite made it. They had Stanley Steamers, electric cars from then and now, solar powered, hydrogen powered, and lots of variations on internal combustion engines.

The Mercedes Gull Wing is a classic for collectors if not for drivers; great for parking lots, not so great for getting in and out; the seat is lower than the bottom of the famous door. The red car was made out of left over aircraft parts, from a bankrupt aircraft builder in 1937. It is actually propelled by the propeller. Doré thought it was a tandem so she’s in the back.

The yellow car isn’t John Lennon’s but its painted to look like his. The two white (one’s cream) cars are a 1-cylinder, 9 horsepower 1955 German car, nicknamed the Egg, and a 12-cylinder, 175 horsepower 1939 Packard, similar to ones FDR and King George used. You can tell which is which. 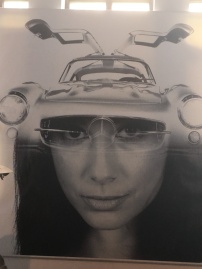 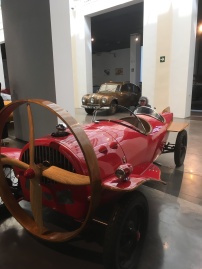 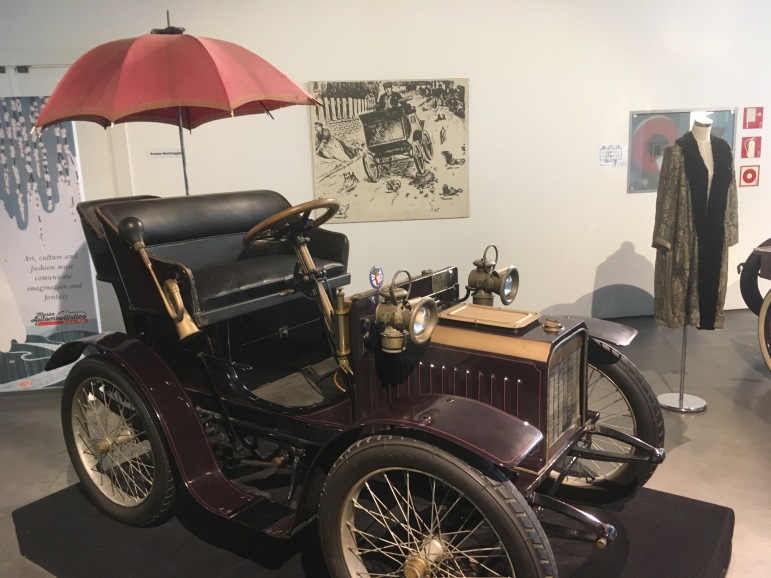 I don’t remember what the bottom one is but it’s even cuter than the Egg. The umbrella is an especially nice touch.

The last room was hot rods. Apparently there are people who are famous ‘artists’ because they do car make-overs. This was one of the results; not sure if the dress goes with this or the one next to it.

And the final display is called Chaos: 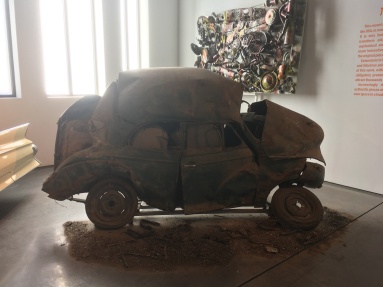 I’m giving you their full description because I don’t understand, as if, to paraphrase Picasso, understanding were important. How can it be both the result and a corollary? Or maybe there are some things you just can’t express in English.