We made three stops in Nebraska, wrapped around the two stops in South Dakota. We went to Alliance for “Carhenge” not for the biking. Carhenge started as a family reunion activity for a family of immigrants (documented) from England. The city has taken it on as a way to put Alliance on the map and other artists have contributed. It was well worth an hour and everyone we encountered was really happy. 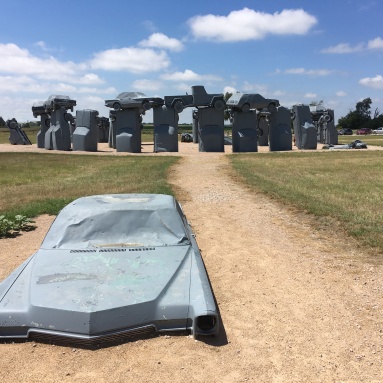 The basic circle took the family two days to erect; I don’t know how they got home. The upper right picture is called “Four Seasons”; the bottom two are once again an auto-steriogram. The Jeep pickup featured prominently in the Circle may have belonged to my father. Or it is one that looks just like it after a day on the gravel roads of Iowa.

Alliance happens to be between Denver and the Black Hills and we were really happy it was. After the Black Hills, we came back to north central Nebraska to ride part of the Cowboy Trail near Valentine. It is long trail and we only did a little of it east of Valentine. It is known for its loose gravel surface, some of which is sharp enough to puncture tires, and its prickly plants, some of which can puncture tires. We launched directly from the motel (nothing in Valentine is very far from everything else.)

While unloading the bike in the motel lot, we discovered the front tire was already flat. I considered pumping it up and hoping, but given the nature of the trail, we opted to replace the tube. We had a spare and an assortment of tools but no tire levers. Google found the local bike shop; it wasn’t far. It also wasn’t open and hadn’t been for months. Rather than wait, I asked the passing letter carrier. “No, there wasn’t anyone in town anymore, but I could try customer service at Henderson’s.” (The local supermarket?) OK.

First I stopped at Bomgaar’s, which seemed to a farm and fleet kind of place. They weren’t a bicycle kind of place and seemed puzzled about why I was there. I went to the grocery store. The lady in Customer Service (we’re in cowboy country; ‘lady’ is the correct term.) was very concerned but only thing she could think of was to ask to butcher. He came right up, “No problem. I’ll punch out and go home to get my tire levers.” He was back in 15 minutes (He didn’t actually live in Valentine or it wouldn’t have taken so long.) He replaced the tube and, when I offered payment, said, “Thank you for coming to Valentine.” 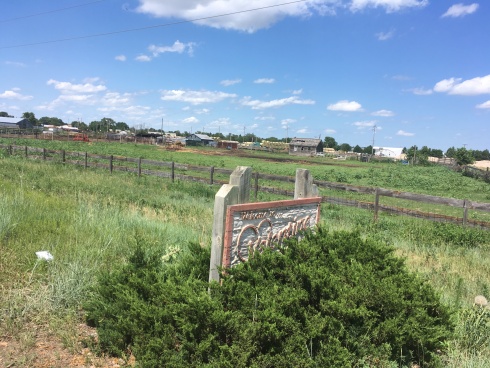 The trail was a little rough but the tube held up.

After a quick side trip to Sioux Falls to ride the city trails and pick up the mail, we were back in Nebraska and stopped in Omaha. This is the city that started Arbor Day, home to a successful financial management company, and birthplace of the Ruben sandwich. It also has a Botanical Garden and some impressive public art. 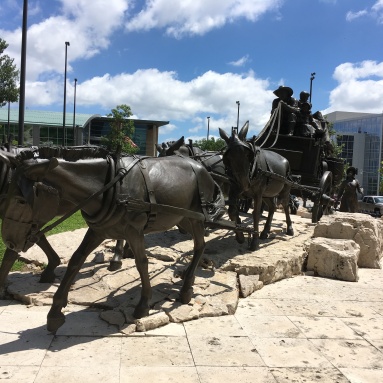 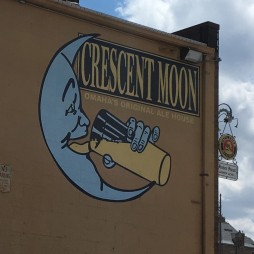 Every time the Twins or Vikings threaten to move, someone always says, “If they go, we’ll just be a cold Omaha.” I don’t think Omaha worries about becoming a warm Minneapolis.

The botanical garden had a really impressive g-gauge train set-up along with the plants (and a couple full size locomotives.)