We were back at the Mercado again this morning; so early they weren’t really open. The concept of ‘open’ is a little personal for the Mercado: the gates were open so we walked in and it was us, the vendors, and their suppliers. They were willing to sell to us when we weren’t too much in the way. One picture here was taken later in the day when it was starting to fill up. The puzzled look of the young man on the left suggests either US or a part of the UK that doesn’t use Euros.

Olives and olive oil are staples. When we deep-fried things for our tapas in class, we used olive oil, which didn’t smoke at 180°C. Many tapas bars automatically bring a bowl of olives when you sit down. Most markets have a range of oils and sizes; five liters was common. The small plates in front are olives for sampling, and buckets for pits. The large orange mound, by the man, is lard; I don’t know what flavor. Maybe that’s its natural color. They do add saffron to lots of things but their saffron is natural, not the orange dyed stuff we get, which would be about the right color. 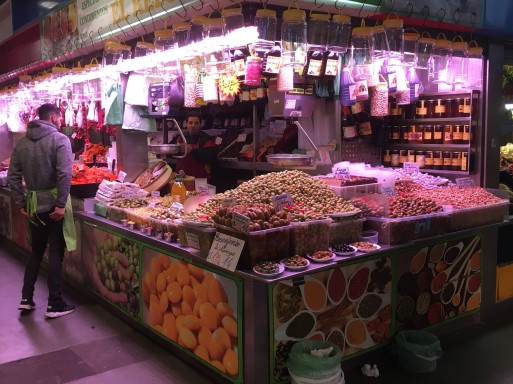 Olives in the foreground; lard further back 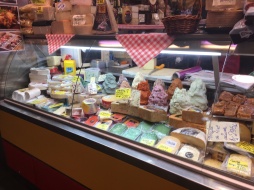 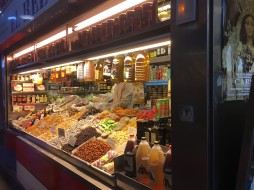 Moving to the right, the cone shapes of many colors (I was thinking gelato) are more lards of different flavors. I wonder how they would do with popcorn (i.e., maiz para palomitas.) Finally lower right, they grow a lot of nuts near here, which can be found with a wide range of coatings. Plus jugs of juices and olive oil. 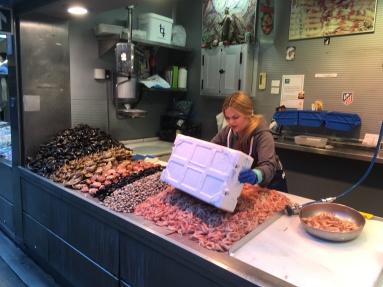 Shrimp and Other Shellfish 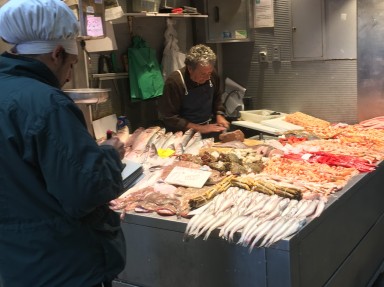 According to Simone, our Sherpa, in order to get a stall, you have to marry in. This young woman with the shellfish (I have forgotten her name but we were introduced) has multiple family members with stalls nearby. She also has perfectly manicured nails when she takes off the gloves. It is shrimp she is dumping out, plus mussels, oysters, and a few other things with shells. I don’t know what the fish are; I’m guessing at the anchovy.

Going by the labels (and my translations of them) the meats include goat, pork, beef, ox, chicken, duck, and sausages. I didn’t notice any goose or turkey; nor any entire ox tails today. 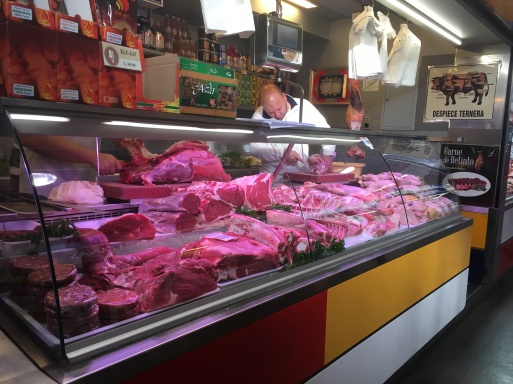 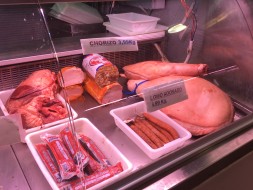 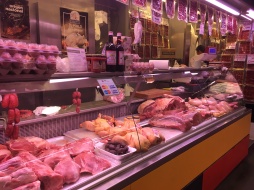 The man on the left (the one you can’t see) has just begun working his way through a goat. 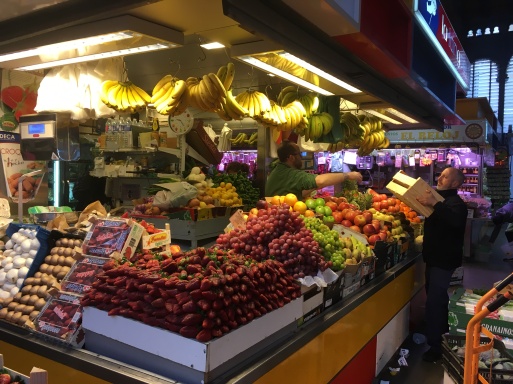 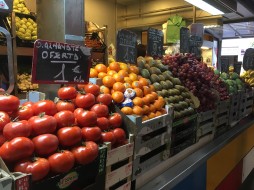 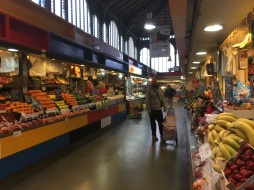 Most of the fruits and vegetables looked familiar, although the names often weren’t. They had fewer things in the produce aisles I had never seen before than the South Pacific. One year ago, we had just left the Maldives, which are in the Indian Ocean if you are going to get picky about it.

After two months here, we have adjusted. Their internal clocks run differently than ours. Not only do they think 22:00 is a reasonable time to out for dinner, at 2:00 this morning there was a procession about 20 feet from our bedroom balcony with hundreds of marchers, drummers, buglers, and spectators, of all ages. Then at 9:30, the Mercado was casually thinking about opening. When shops and cafés list their ‘morning’ hours those typically end at 14:00, more or less; then they close for three or four hours, more or less.

Going back to the Midwest should be an even easier adjustment: 22:00 here would be just about the time that Elsie’s senior menu kicks in.