We went to western New York to ride the Erie Canalway Trail and see the Falls. First we stopped for wings. 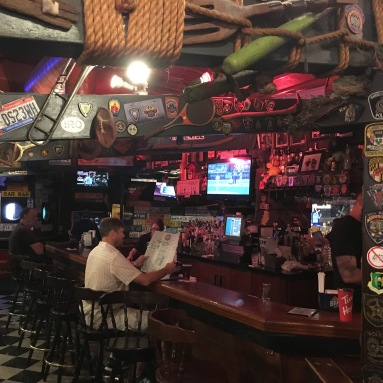 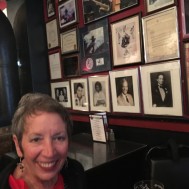 The GPS put us in a lane of no-return; we turned ourselves in at the first opportunity. For penitence, they let us wait in the sun for twenty minutes and then escorted us pretty much to the head of a very long line waiting to get into the US. To add insult to injury for the people behind us, we spent a very long time at the window.

The escape clause is that if you have a passport, or have ever had a passport, they can find you online. I’m not sure if we should be comforted by that.

The take-away here is don’t trust the GPS blindly and always take your wallet.

We did see the Falls from the American side. Photos don’t really capture the experience.

The statue is Nikola Tesla, who developed alternating current power when Edison was stuck on direct current. He helped design a power plant at the Falls.

We were here to ride the Erie Canalway Trail. It is on Google Maps and the Rails to Trail Conservancy. It runs from Buffalo to Albany, with a couple major gaps and a spur to Niagara. On the ground, we never found any reference to that name. We found lots of trails where it should have been or maybe we found one trail with lots of names. The common thread seems to be “The Shoreline Trail” but that seemed to go to Niagara rather than Albany. 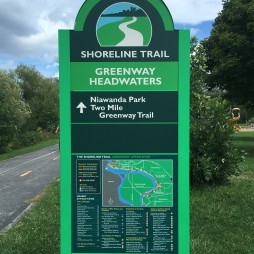 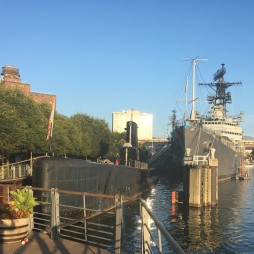 Part of our problem was in Buffalo there were lots of little gaps, very few signs, and none with the name we thought we were looking for. After lunch and 34 miles where we knew where we were some of the time, we found the car, escaped, and moved on the Albany.

There was no Erie Canalway Trail there either but there was a Shoreline Trail although it was sometimes labelled “Albany County Rail Trail”.

It was an easy, fast, interesting trail and gave us 51.25 miles for New York.