Day 1: Minneapolis to Bismarck, 437 miles, all in the car

We do not intend to cover this many miles again in one day but we were anxious to finally get started on the Great American Car and Bike Tour. Not exactly the same as an European Barge and Bike but this is America. We did manage to take breaks from the car (more than gas stations and freeway rest stops) in Barnesville, MN, and Fargo, ND.

In Barnesville, we learned we were three months early for the Annual Barnesville Potato Days. You have until August 1 to submit your entry for the Potato Peeling contest (adult and children’s categories), the Miss Tater Tot contest (ages 5 to 6, must be enrolled in a Barnesville school), the Potato Cook-Off (this year’s theme, breakfast), and of course the Mashed Potato Wrestling Contest (limited to 16 entries, tag teams allowed.) The Potato Peeling champion will be determined by the weight of the potatoes peeled minus the weight of the peels; provide your own peeling implement, non-motorized. We can email you an entry form. 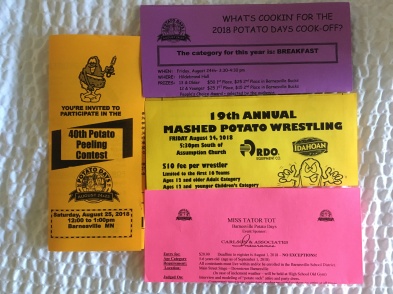 In Fargo, we learned we were one day off to have lunch at the Hotel Donaldson, dba HoDo. Closed Memorial Day but we did get a bit of a tour. (They seem to have a penchant for two-letter abbreviations.)

Like most old hotels, it has been a hotel, rooming house for either working men or working women (Why do those carry different connotations?), or vacant at various times. In 2001, Karen Burgum Stoker bought the building and developed it into a boutique hotel with each of the rooms, the restaurant, and lounge featuring to work of North Dakota artists. She credits the Coen Brothers for the revival of downtown Fargo “They could have called their movie ‘Brainard’ just as easily.”) (Stoker’s former husband founded Great Plains Software, which was purchased by Microsoft for about $1,000,000,000.)

North Dakota doesn’t have a lot of ‘Rails-to-Trails’ bike paths; they still need them for carrying oil and wheat. We did ride a little over 30 miles on the Lewis and Clark trail going northwest out of town through Mandan toward Harmon and the Riverfront Trail along the east bank of the Missouri. My association with Mandan is that American Oil had a refinery there when I was in the business of marketing gasoline. The refinery is still there but isn’t American Oil anymore. It sits along the west bank in the midst of wetlands and lagoons.

In spite of this pictures, this is not the flat part of North Dakota. The west bank trail was hilly, generally followed ND Highway 1806, and not particularly charming. I’m not sure if the 1806 actually refers to Lewis and Clark or just happened to be the number for the next highway. It was probably 1804 or 5 that they passed through here. 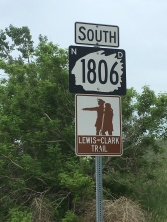 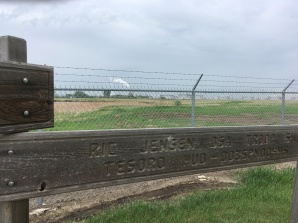 The east bank followed the river, wandered through city parks, and was generally flat. Until the very north end when it climbed a bluff that was almost impossible for us. There are almost continuous historical markers and installations, mostly related to Native American history and traditions. The prevalent theme was the bald eagle, featured in the lower right.

Day 3: Theodore Roosevelt National Park should be on everyone’s to do list. They certainly rival the Badlands and Black Hills of South Dakota but unlike South Dakota, the rock formations are all natural. If you are into camping and hiking, you could spend weeks here. We spent about three hours but saw our share of bison, antelope, prairie dogs, and many, many avian dinosaurs. It was raining when we first got there and animals, except humans, generally have enough sense to stay out of the rain.

Starting with a stereograph of the Painted Canyon: 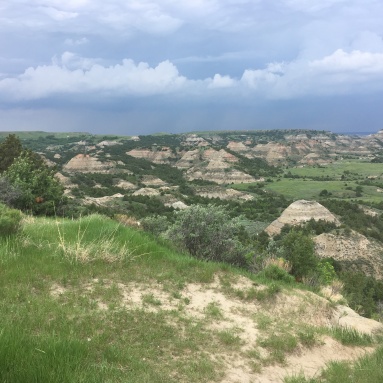 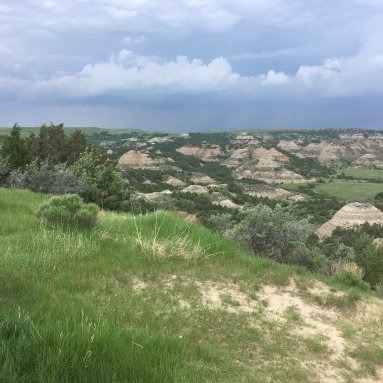 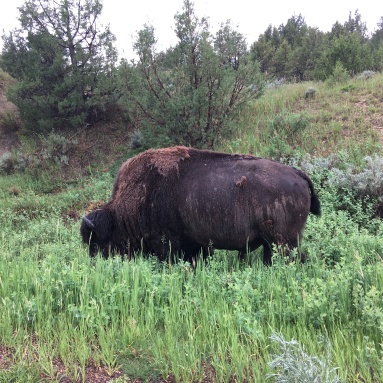 Based on the prevalent tone of bumper stickers, t-shirts, and campaign signs, we are keeping our opinions to ourselves. “My AR-15 self-identifies as a musket” offends me on at least three counts but “If God didn’t want me to eat animals, he wouldn’t have made them out of meat” is clever.

On to Montana; or is it Montaña?