Some people like the cruise experience for its own sake, but I guess some people like all-inclusive resorts and lying on the beach for a week. The only problem is to finish breakfast in time for lunch.

We choose our cruises for the itinerary and try to minimize the days at sea. Then the ship is a moving hotel; you go to sleep some place and wake up some place else. It’s like a bus tour without the unpacking. But, like a bus tour, if it’s Tuesday, it must be Lisbon. You only have time to see what you’re supposed to see. It is a good way to get a taste.

(On sea days, you see a lot of water. The picture above is one of the Maldives from last year; I don’t have any that are just water. After a few days of nothing but water, any island is exciting. And the one sure cure for seasickness is to sit under a tree for a couple hours.)

The 108-day around-the-world cruise was another thing entirely. There were over 60 sea days. It was an extended visit to small, isolated British town, about 1,000 inhabitants. It was a small town with nothing of architectural or historical interest, but there was more to do than just the sun deck, shuffleboard, or casino. We lived there (with a cook and a maid, of course); we met people; we made friends; we visited the library; we attended concerts and lectures; we tried to understand their humor; we tried to explain our politics.

Málaga, at least the Historic Central district is the most limited-mobility friendly place we have ever seen: almost no cars, almost no curbs, smooth (mostly) pavers, and a ramp into every (almost) store or restaurant. Outside the district, not so friendly. We tried many times to buy excursions that the booking agents thought could handle a wheelchair, tours where Doré could keep up with the guide, and would require less than eight hours on a bus to go 50 miles.

We booked a cruise instead. That got us to some of the places the booking agents said we couldn’t go: Lisbon, Portimão, Cadiz, Seville, Casablanca, and Gibraltar. Getting there and back took seven days on a ship instead of eight hours on a bus. Meals were included.

It’s Tuesday, so it’s Lisbon: the capitol of Portugal, with its iconic “safe” Jesus (it’s a baseball term in contrast with Notre Dame’s ‘Touchdown” Jesus.) The town is anything but flat, so we shared a tuk tuk with a couple from London. 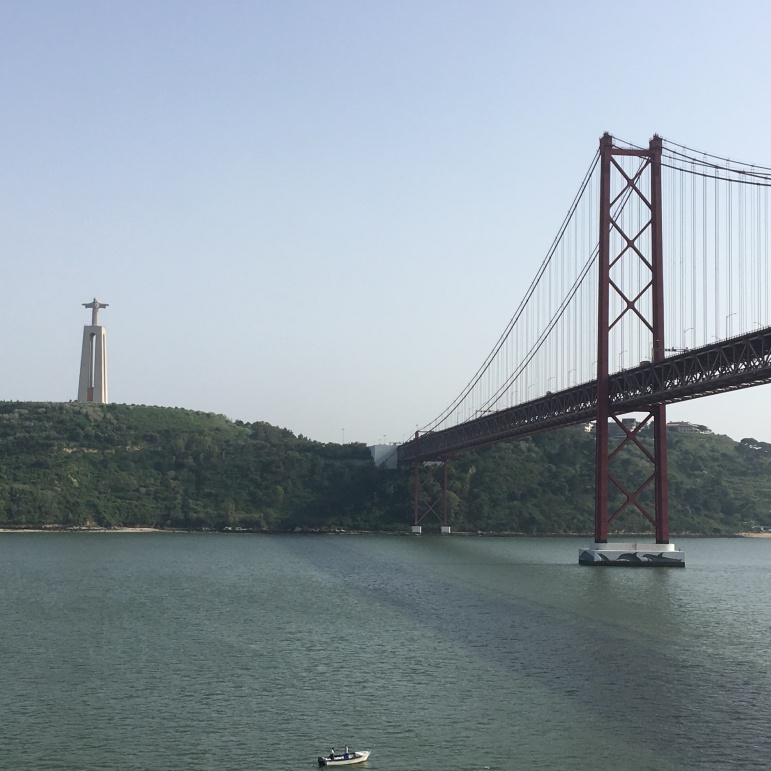 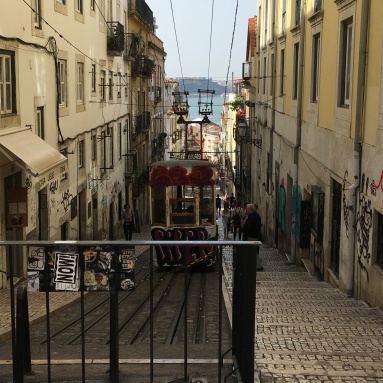 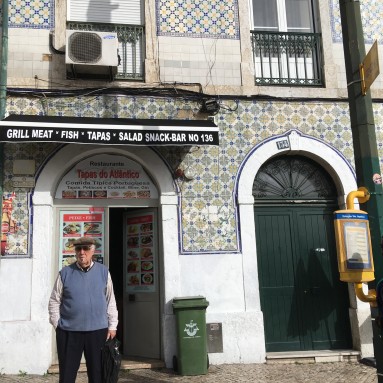 The most iconic Lisbon is not the Jesus but the ceramic tile. Traditionally, most exteriors are covered with hand-laid tile. They are trying to revive the tradition but it’s expensive. It is a good place to buy tile.

Portimão is in the Algarve area a little south of Lisbon, purported to have some of the best surfing in the world. The day we were there the sea was flat, but we didn’t have our surfboards anyway. 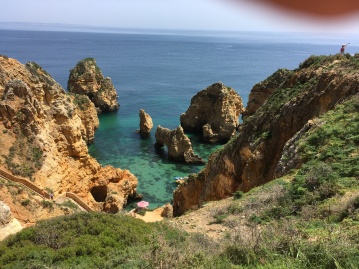 The Algarve region does have some spectacular views; better without my thumb. The statue is Dom Sebastian I, “boy king”, who was king for 21 years, beginning at age three.  Dead at age 24 in a poorly planned attempt to capture Morocco for Jesus (and reclaim some former Portuguese trading posts). This left Portugal without a king and without an heir to the throne, which gave Uncle Philip, king of Spain, an opening to unify the Iberian Peninsula. It also gave rise to any number of pretenders claiming rights to the throne and to “Sebastianism” conspiracy theorists who didn’t belief the king was dead and would return to save the nation any day now. Four hundred fifty years and counting. Chaos ensued.

Until that last crusade, he didn’t seem to have been a bad king, or whoever was making decisions for the three-year-old did alright. That’s your taste of Portugal.

Cadiz is the port for Seville, which is one of the places tour organizers didn’t think we could do. The ship’s excursion director agreed; we did it; on our own. 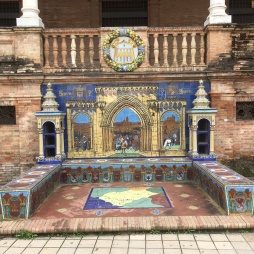 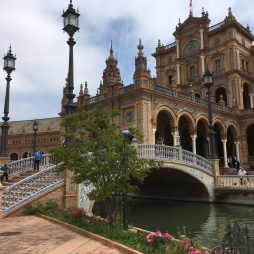 The Plaza de España was our first stop. It was built for the Ibero-American Expo of 1929; now it is government offices.

Seville also has its own cathedral, el Catedral de Santa Maria de la Sede, with all the columns, arches, main altar, side altars, and art works that one expects with a Gothic church. It’s the world’s largest cathedral and the third largest church. (The two larger churches don’t have Bishops so aren’t cathedrals; St. Peter’s Basilica just has a Pope.) The God of the 16th Century had pretty demanding architectural requirements. 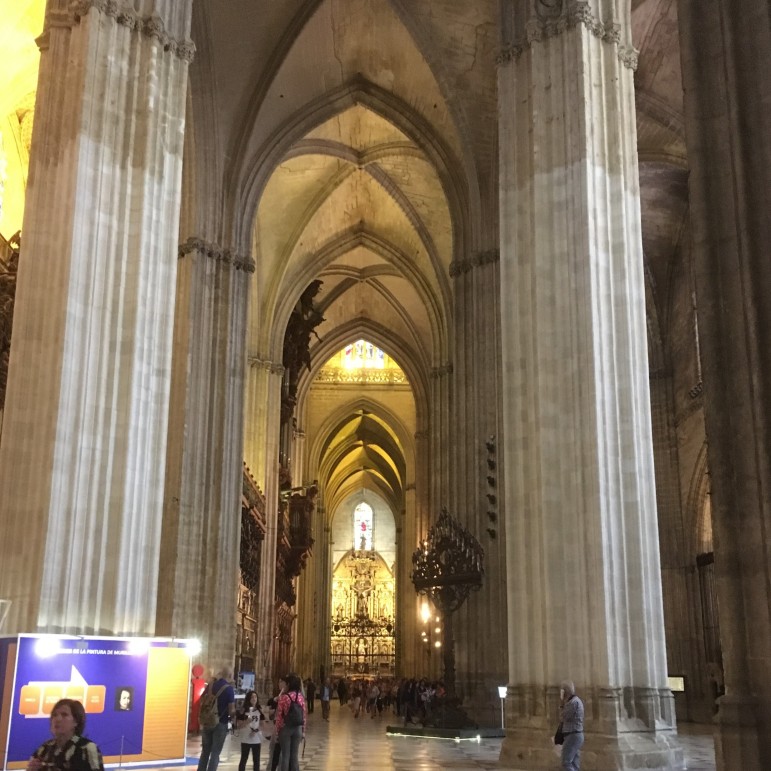 This one also has the tomb of Christóbal Colón (aka, Christopher Columbus, who is famous for being the last person to discover the Americas.) Like Columbus, we sailed away from the European continent.

We have now been to the northeast and northwest corners of Africa; that leaves a lot to be explored. Morocco was another place the excursion directors were reluctant to send us. So again, we went on our own. There were two things we came to Casablanca to see: the Hassan II Mosque and the Central Market. We knew what we wanted and had a simple plan. There is always a row of cabs just outside the port. We would let a driver approach us, as they always do, as we try to sneak by, as we always do. We would explain our plan, listen to his price, offer him half, and agree on some number. We have done this before.

A driver accosted us right on schedule but he had a much more elaborate plan for our day, and a much higher number. While we were still arguing the itinerary, we were approached by three more drivers. Or rather, our driver was approached by three others. There followed a very animated conversation in some language other than English, Spanish, or French, and that didn’t include us but clearly involved us. Whenever the opportunity presented itself, I would interject in English, “Just the Mosque and the Market.” The conversation continued until we turned and started to leave; then our driver’s primary antagonist threw up his hands, in obvious disgust, and the three left.

Our driver was much more willing to negotiate. We settled on a reduced version of the his itinerary for half what he wanted and twice what we wanted.

For the reasons we came, this you-tube video is better than my snapshots. I have heard everywhere from the world’s third largest mosque to the thirteenth largest. At any rate, it is big and this God is also architecturally demanding.

Le Marche Central is famous and infamous. And quiet. Compared to the Spice Market in Istanbul and even the Mercado Central in Málaga on a Saturday, this was child’s play. It helped that we got there shortly before prayer time; most stalls were closed or closing. We had the place more or less to ourselves while we learned our way around. There were a couple aisles that we skipped because they were covered with men on rugs. After prayers, no one seemed in a hurry to reopen. Doré was able to score a couple magnets.

After viewing several more areas, monuments, and city walls from the cab, he wanted to show us their new shopping mall on the edge of town, we declined, and we were happy with our day and with our guide/driver. I gave him about a 15% tip on top of the agreed upon price. He wanted to renegotiate; I didn’t. That was all the Euros I had brought with me, or so I said; he offered to drive us to an ATM. We declined. He was not happy with his day.

Back to Europe and the UK in particular. Gibraltar has been a British territory since 1703. Spain occasionally tries to claim it. It has been put to a vote a couple times in the last 50 years and the locals voted overwhelmingly to stay with Britain. They also voted 97% in favor of staying in the EU. It is going to a major hassle when they have passport control at their border with Spain, which thousands of workers cross twice a day, every day.

Africa on the right

Eight miles in between

According to Winston Churchill, Gibraltar will be British so long as there are monkeys on the Rock. The locals take good care of the monkeys. They provide food daily to ensure they live long and prosper. And that they don’t come into town raiding dustbins. Tourists are strictly forbidden to feed them and even to have food with them. The monkeys will find it; also sunglasses, small purses, and dangly earrings. 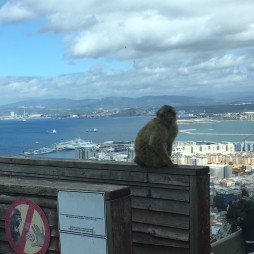 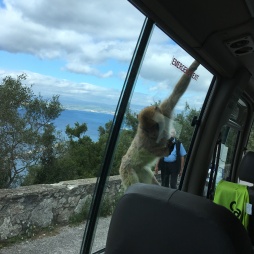 Partly because they are tailless, they are often referred to as “Barbary Apes” but they are macaques, a tailless monkey. Until recently, there was speculation that they were the last remnants of a European species, but DNA tests have confirmed they are African. They undoubtedly arrived by ship, either as stowaways or as pets.

Contrary to what insurance companies might have you believe, the Rock is not as solid as you think. There is an extensive system of caves. 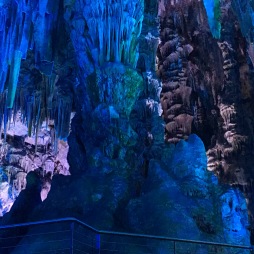 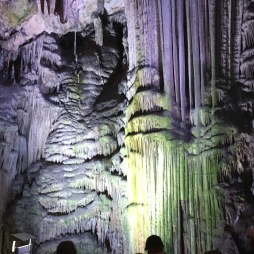 And there are 34 miles of manmade tunnels; the entire territory is only 2.6 square miles. The tunnels were dug prior to and during World War II. They were seriously expecting to be invaded. Women and children were evacuated for several years. The territory was subject to bombing raids but was never invaded. 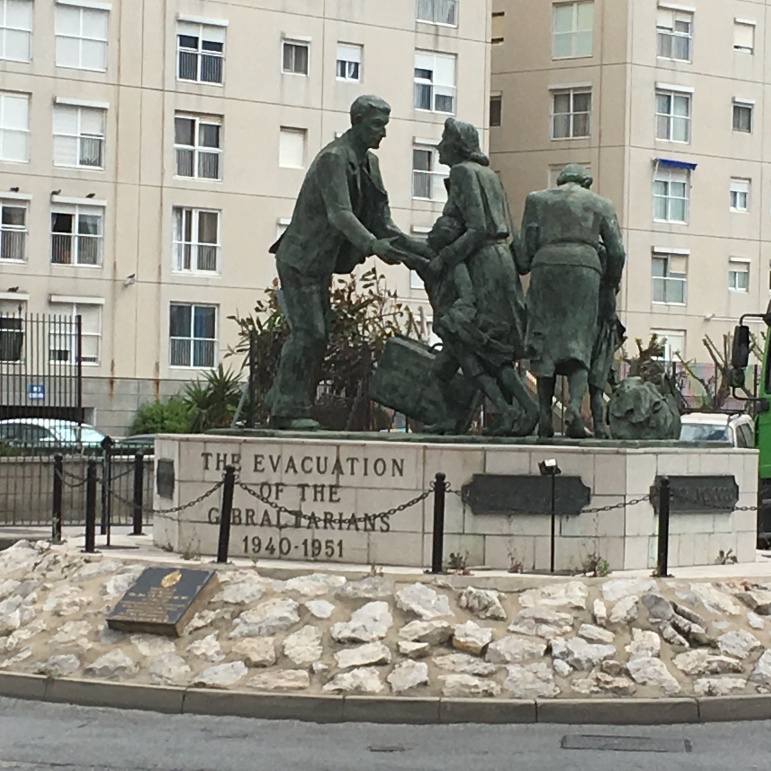 Memorial to the evacuation

Where’s Dr. Who or what’s a phone booth for? 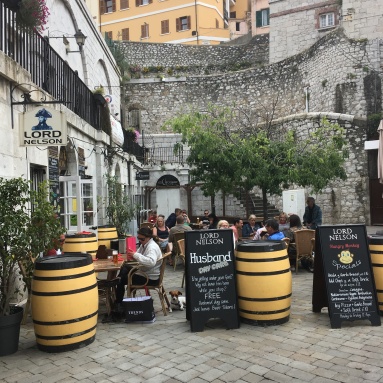 The rocks from excavating the tunnels were used for landfill to extend the one runway at the Gibraltar International Airport. The runway now has the distinction that it is the only international runway in the world that crosses a highway, which has crossing gates like a railroad track.

Crossing the runway was another life event that we hadn’t expected.