María del Carmen Rosario Soledad Cervera y Fernández de la Guerra, Dowager Baroness Thyssen-Bornemisza de Kászon et Impérfalva, among other things, was an art collector. Among the other things she was: Miss Spain 1961, model, philanthropist, the fifth wife of Lex Barker, the first wife of Espartaco Sontoni, and the fifth wife of Baron Hans Heinrich Thyssen-Bornemisza. She was also accused of tax evasion through off-shore corporations. (She says the corporations are important to transport artworks internationally.)

The smallish museum, of about 200 Spanish works, is her private collection, not to be confused with the Thyssen family collection, which has its own museum in Madrid. This building is a recently renovated 16th Century palace. It is considered one of the best examples of Renaissance architecture in Málaga, with clean lines, simple columns and arches, and beautifully carved wooden ceilings. The original part is two stories built around a central courtyard. It wouldn’t have been all that foreign to the occupants of the Roman city that was once on this spot.

By old, they mean wood and terracotta sculptures from the 12th Century and paintings through the 15th. Because Málaga was Moorish from the 9th through 15 Centuries, this section is more Italian than Spanish.

A Confraternity in Procession, 1851 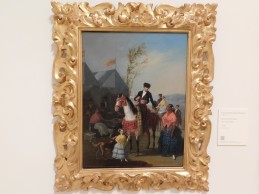 Costumbrimo means depiction of daily life. The most common scene seemed to be washerwomen, which had be a never-ending task. The three shown here are more annual than daily. The two on the right are by the same artist, Benjamo, apparently using the same model for the mounted rider. Even in the mid-19th C., they were still painting children as miniature adults.

On the left is A Confraternity in Procession along Calle Génova, by Dehodencq, which is a Holy Week procession. A “confraternity” is a bunch of guys who dress alike usually with a religious affiliation; sort of like the New Orleans Marti Gras Krews. The black robes and hoods are the habits of the group. This painting predates the KKK by a couple decades and the habits go back much further. The seated women are wearing black mantillas signifying morning for the crucified Christ. A canopy in the background is covering the throne carrying the Mater Delorosa, which in this context means the Virgin Mary mourning the death of her son. This is the sort of thing we can expect during Holy Week.

Naturalist and Précieux  style are more photograph-like. This was the style, especially of seascapes, that was selling in Paris at the time so the Spaniards weren’t total romantics. 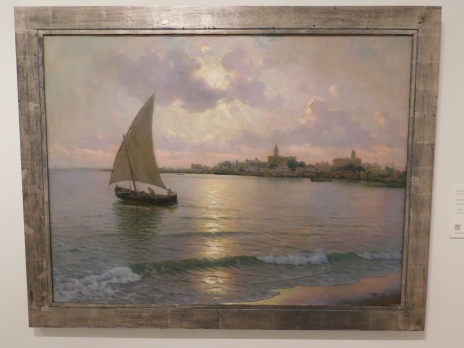 The tastes in Paris changed. Now they wanted optimistic images of the life and culture of Spain. The Spaniards obliged, but not without some controversy. The argument originally focused on the work of Zuloaga, one of the most successful artists of the time, and became known as the “Zuloagan Question.” 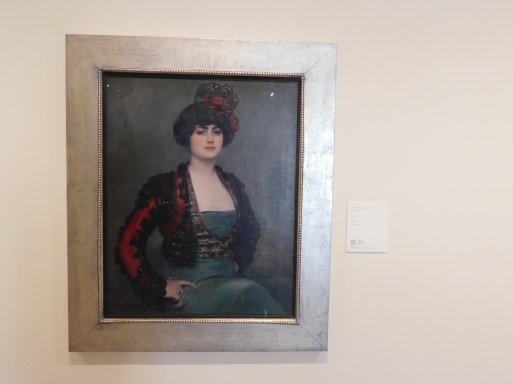 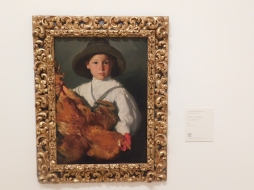 Boy with a hen

The question was, “Who or what should represent the image of Spain?” Looking within Spain, that’s not at all an easy question to settle. Spain, with it varied geography and multiple languages, is no more homogeneous than most other countries. Looking beyond Spain, most national boundaries are set by conquering armies and who can grab the most territory. To repeat an earlier comment that I plagiarized from someone, we need to learn to share the planet rather than divide it.

The museum also has a temporary exhibit on Cubism, stressing the efforts of Juan Gris and María Blanchard, with no mention of that other painter born in Málaga. No photographs allowed.

We have now covered iglesia numero uno y museo numero uno. We are working from a list of about 50 museums, churches, castles, and monuments. That’s Málaga. Then there are Torremolinus, Fuengirlom, Marbella, Ronda, Granada, Cordoba, Seville, and Gibraltar within two or three hours.