Unless you are interested in mining phosphates, the reason to be in Safaga is to pass through going other places. There is good diving on the reefs in the Red Sea and it is near the historic granite quarries of Mons Claudianus, which were used extensively by the Romans to build Rome. Moving 60-ton columns from Upper Egypt without the canal has to be part of the reason Rome wasn’t built in a day.

For us, Safaga is about a three hour bus ride from Luxor and the Valley of the Kings in the Nile Valley. The destinations more than justified the bus. I was a little surprised by the trip. We knew it was a long ride through the desert. I expected a flat, straight road as far as the eye could see. Instead, the first half wound its way through and around what were either small mountains or huge sand dunes or massive piles of rocks. They looked like a massive gravel pit with piles of rocks created by humans, surrounded by sand. And almost no sign of life as we drove through. 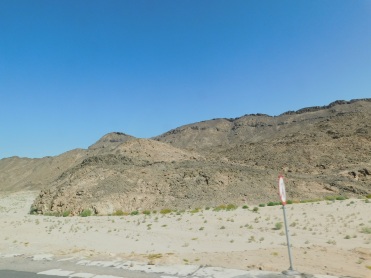 For ‘security’ reasons, we traveled in a convoy of several buses that was not allowed to stop with escort vehicles in front and behind.

The second half of the trip is within reach of irrigation canals from the Nile. It’s a major agricultural region, primarily sugar cane but wheat, corn, rice, and many fruits and vegetables. The sugar cane harvest was under way, with the cane being transported on people’s backs, donkeys, donkey carts, tuk tuks, trucks pulling two or three trailers, and narrow gauge railroads. We saw a lot more donkeys than we did tractors. Now the ‘desert’ was teeming with people, donkeys, goats, birds, and an occasional camel.

The trip was uneventful.

You had to be there. Nothing I can say or show tells the story.

Luxor is a city in its own right. People live there, work there, die there. At various times under various names and various Pharaohs, it has been the capital of Upper or both kingdoms. It is the site the Temple of Luxor, which was built about 3,500 years ago, with contributions from several Pharaohs, including Amenhotep III, Tutankhamen, and Ramses II. It is not dedicated to any god but to the restoration of the kingship, not that the Pharaohs weren’t gods.

This temple is  connected to the Temple of Karnak by the Avenue of Sphinxes, which is a couple miles long and lined by sphinxes. The final sections are being excavated so you should soon be able to walk as they once did. Do it early or late. When we were there the temperature was a very ‘comfortable’ 35 degrees C under a blazing sun; often it gets uncomfortably hot.

The Valley of the Kings was in the desert on the west side of the Nile. It is the site of the tombs of many Pharaohs, including the most famous of them all Tut. They do not allow photographs. Because the tombs still have the original paint, they used to allow photos without flash. But some tourists ignored the flash part, so now they do not allow any photos. Some people still ignored it (The “my couple pictures won’t hurt” philosophy) so now they don’t allow cameras. (Very strangely, our on-board port lecturer actually told us he has sneaked his cell phone in (actually he said ‘mobile’) but don’t get caught; they will erase your memory. Not quite like ‘Men in Black’ but sometimes it seems close.)

It was actually rather pleasant not to worry about looking for the perfect shot or to be surrounded by people taking pictures of themselves standing in front of the thing we all came to see.

And I don’t know what the perfect shot would have been. While the rooms, and there were several in every tomb, are empty, the walls and ceilings are completely covered with hieroglyphics, some telling the story of the man’s life, some provide important information from the holy books that the Pharaoh will need to know when he (‘he’ is accurate with only one or two exceptions) awakens. Of course, when he awakens, he will be as a child and not remember the way to the afterlife so will need the reminders. And of course, food, wine, money, and appropriate offerings to the other gods.

If you are going to use massive monuments as tombs, you have to plan ahead. Construction of a Pharaoh’s tomb began as soon as he took office and continued until he died. Then you had to have him entombed within 70 days, so there wasn’t time to build something appropriate if you waited until you needed it. Ramses II who ruled for 67 years had the biggest and best, which meant more rooms to be filled with whatever he needed to make the trip quickly and comfortably wherever he was going.

Tutankhamen was important mostly because he wasn’t important. He died young so didn’t accomplish much. And more critically, his tomb wasn’t anywhere near ready. So he was buried in the tomb intended for the high priest, only two rooms, relatively unadorned, which was quickly covered over with drifting sand. Two other, more important tombs were built more or less on top of Tutankhamen. All of which means that Tut’s tomb was the only one that we know about that wasn’t looted hundreds of years ago. It was looted about 90 years ago, by official anthropologists, which means almost all the 5,000 pieces found are in a museum somewhere, not melted down or in a private collection. But that doesn’t help the boy king get to his appointed spot in the afterlife, does it?

We had lunch on the Nile, on a more or less traditional Felucca boat. There were eight of us plus one waiter and one sailor on each. The boat was fascinating, the surroundings indescribable, and the meal memorable in any circumstances. Egyptians have their big meal at lunch, then rest for a few hours until it cools off. We had a massive meal, although they kept urging us we need to eat, and assuring us this was not that much.

The starter plate was a sampler of every mid-eastern appetizer you’ve ever seen and more than adequate as a meal in its own right. That was followed by mixed grill of lamb, chicken, and beef, plus seasoned rice and potatoes with onions and other things.When we saw them preparing the dessert plate, it looked reasonable enough until we discovered there was a plate for each of us, not one for the table to share.

We made a quick stop at the Colossi of Memnon. These are the biggest statues in the area and depict Amenhotep III. I don’t remember how big but the Ancient Kingdoms understood really big is better.  At this point in the day, we had been on the road for nine hours and still had a four hour drive back to Safaga, where the boat was parked.

And one more gantlet of sellers to run. Compared to Komodo Island and Gisa, these guys (almost always guys) were pussycats. The advice we had been given by the locals was ignore them, not even ‘no, thank you.’ That is considered the opening gambit of negotiations. Doré couldn’t do ‘ignore’; her immediate reaction is always “That’s beautiful but…” That was positive enough to draw a crowd.

The robes are typically. Almost all men, and some boys, wore the traditional long robe, usually in white but could be other, usually light, colors. Doré, in this picture, would be dressed appropriately and conservatively for an unmarried woman, if she had had the scarf on her head. Married women wear solid black, which still makes little sense to me in a country where the temperature can get to 60 degrees C (that’s why I said 35 was comfortable.) The long flowing robes make sense; black not so much.

Or did I mean ‘gauntlet’?

2 thoughts on “Egypt: Safaga, Luxor, the Valley of Kings”