Before the bike ride, Wyoming is about Yellowstone and the Grand Tetons, bison, elk, deer, wolves, bear, and geysers. The majority of the world’s geysers are here, as well as steam vents, boiling mud pools, and ‘paint’ pots. We only watched one geyser eruption along with several hundred other people. Fortunately, it was a slow day. The eruption will be on FaceBook if there is anyone out there who hasn’t seen it for themselves.

(The geyser in Iceland, named ‘Geyser’, which caused Europeans to think that is what all geysers are called because it was the first they had seen, is actually much more spectacular but far less predictable.)

We didn’t see any wolves or bear and the Big Horn Sheep were so far away we had to be told that’s what they were. The scenery goes on forever, or until the next major volcanic eruption. Because this hot spot is so well vented, everything is expected to last for tens of thousands of years. 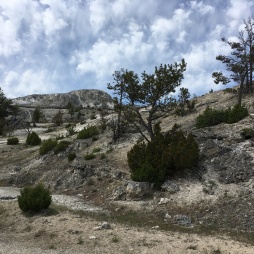 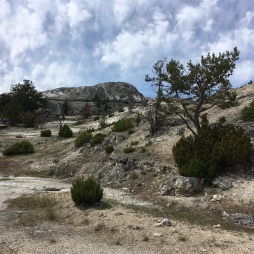 I don’t know why it took us so long to get here; it’s a lot closer than Iceland or New Zealand.

We landed in Jackson two nights. Jackson is the name of the city; Jackson Hole is the name of the county. Not even the locals seem aware of this or maybe the Chamber of Commerce likes it this way. This is a hard core tourist town, packed full of quaint, ‘authentic’ shops and saloons and $75 steaks. It is however at the end of a highly rated bike trail. Others come for the skiing.

While the trail is classified as ‘rails-to-trails’, it had a couple climbs. One was just under a mile long with grades between 3 and 5 percent. The other was shorter. We quickly became aware that we had done all our training at an elevation of about 900 feet. The elevation of the south end of the valley is 6,000 and the north end is almost 6,800.

The good news is the return trip was mostly down; the bad news is a 10 to 15 mph head wind sprang up. (A fundamental law of biking is a head wind will change when you head home.) At least until we ran into a squall and the wind shifted 90°, increased considerably in velocity, stirred up many dust devils, and lowered the temperature 10 to 15 degrees. The rain missed us. 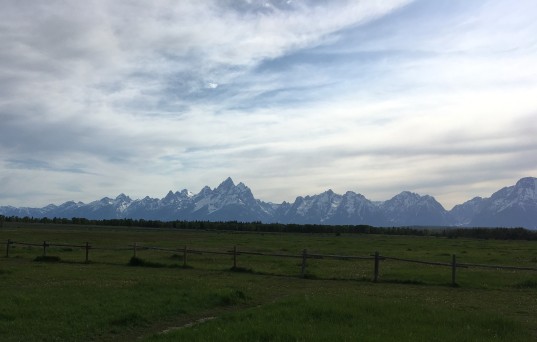 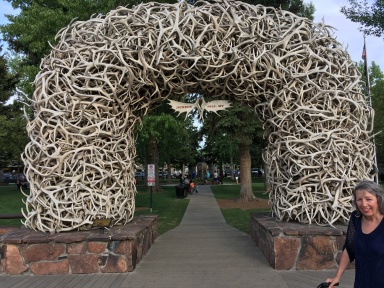 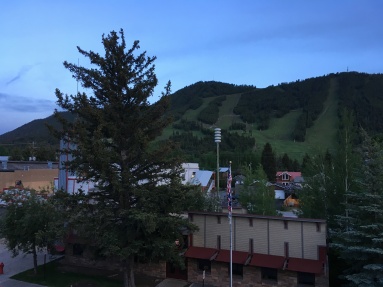 The trail was called the Grand Teton Multi-Use Trail; we encountered several other bikes, dozens of hikers, one inline skater, and no skiers, horseback, or snow mobile riders. While the trail followed the Snake River, we actually saw the river twice; once at mile 12 when we crossed to the other bank and again at mile 24 when we recrossed. Mostly we were in a sage-brush covered plain with no trees in sight.

We stayed in the Ranch Inn, perhaps the funkiest, cheapest motel in Jackson. Our room was in the ‘tower’, because it was three stories tall and had an elevator. I don’t expect much sympathy: the sage-brush covered plain we biked over was framed by the Grand Teton Mountains, populated with elk and bison that we know about, our launch point was Jackson (Hole), and our turn-around point was Lake Jenny, a very blue, very cold mountain lake with a lodge with rooms for $530 per night. We had snacks on the porch.

We did what we came for (which makes us tourists) and, at breakfast, met some ranchers who were in town for a horse auction (that makes us travelers.) They talked about horses; we didn’t talk about politics.