Everyone who has ever been to the Costa del Sol tells us you have to go to Ronda. We assumed, because everyone has to go there and because Málaga is a major tourist destination and cruise ship port, an excursion to Ronda would be easily arranged. What we heard from two Tourist Information offices was, “Yes, you must go to Ronda. No, we don’t handle those arrangements.” What we heard from three travel agents was, “Yes, you must go to Ronda; it will cost $75 each. No, we don’t pick up anywhere near you; the closest to you is about a mile away, leaving at 7:00. Yes, the buses make many stops at hotels to pick up and drop off others; it will take about four hours to go the 50 miles. No, the buses do not have restrooms; but the drivers sometimes make ‘comfort’ stops. No, we’re not sure if they can accommodate a wheel chair.”

We booked our own taxi for something more than twice the price, non-negotiable, from “Cheap Taxis Málaga.” We’re not in Mexico anymore; here they are sometimes rather offended by attempts to negotiate. What we got was Sergio, a very cordial, informative, nonintrusive driver and guide, who is fluent in English, loves showing people Andalucía, in general, and Ronda, in particular, and drives a new Mercedes. It took from 9:00 until almost 12:30 to get to Ronda, but we went by way of Los Dólmenes de Menga y Viera, which added almost two and a half hours.

Los Dólmenes are burial chambers built in the fourth century BCE during the late Copper or early Bronze Age, one or two thousand years before Stonehenge and the Egyptian pyramids. The architecture is in some ways similar with very large vertical stones (megaliths) with more very large stones forming a cap. Because the Dolmens are chambers, the stones have been carved to fit together, although not with anything like the precision of the Pyramids. But copper does not make for easy stone working; they probably shaped a stone by hitting it with a harder stone.  Then the whole thing was covered with dirt to make a small dome-shaped hill.

The iron gates and drains were added in the late Holocene or early Anthropocene epoch. 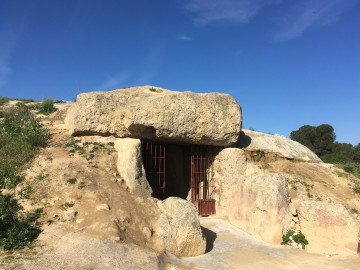 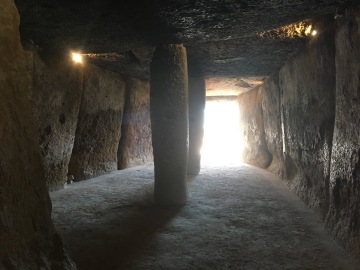 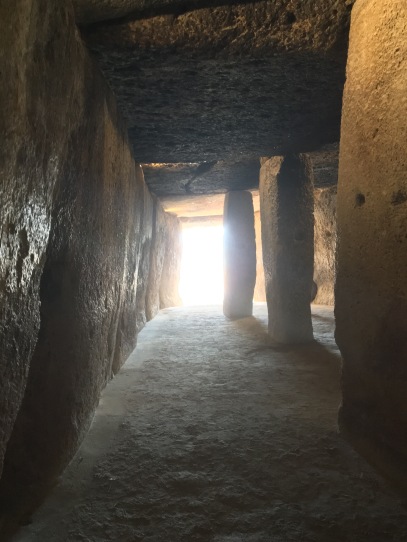 As with Stonehenge and the Egyptian and Mayan Pyramids, the movement of the sun was important to whoever did all this work. The doorway and corridor of Viera (bottom above, left below) align with the rising sun (center below) on the Equinoxes. And the man shown in profile, on the right below, seems to be lining up Viera and Menes. He is probably not the surveyor or supervising architect. 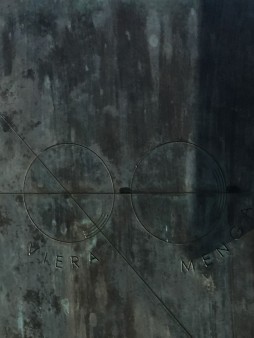 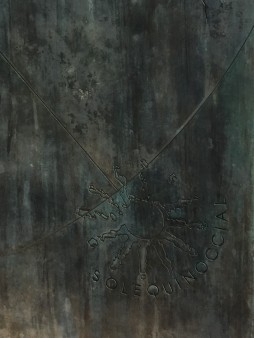 I think that is what this art work is explaining. Not only is it not in English, it is barely in Spanish. Other parts of the dolmens align with major landmarks in the Sierra del Torcal mountain range. The man in profile bears a striking resemblance to this guy, who is lying horizontally nearby.

El Torcal range is renowned for its unusual rock formations. The name of this rock comes from the usual story, this time featuring a Moslem boy and Christian girl: boy meets girl; families have a problem; … .

On to Ronda. You drive from Málaga to Ronda for the view, not the food. TripAdvisor has most restaurants in town rated between 3 and 4, with McDonald’s at 3.4 and that doesn’t have a view. We picked Restaurante la Pilastra del Torero, because it was at south end of el Puente Nuevo (i.e., ‘New Bridge’.) All things being equal, we would have chosen an elevator over a picturesque, well-worn marble staircase. I would rate our visit higher than the TripAdvisor 3.9, factoring in the view.

For the sake of documentation, we had a bottle of a dry white from the local Muscatel de Grano Muendo, 16€, the lunch ‘menu,’ which means something like lunch ‘special,’ of salad with tuna, gazpacho, pork loin, spaghetti with meat sauce, and desert, 20€ por dos. The service was admirable, the price was reasonable, the food was adequate and almost incidental to the experience. Sitting at this railing, with a glass of wine and a chocolate mousse is quite pleasant.

Humans have lived in this area for at least 10,000 years, maybe 50,000 off and on. The Romans had a city here and the Celts before them but they weren’t the first. Many buildings date to the Moors, who lost control in 1485. That was followed by centuries of persecution and destruction of anything Islamic. The Inquisition, which covered Moslems as well as Jews, was started during the reign of Isabella I in the 15th Century and not officially ended until the reign of Isabella II in the 19th.

Part of the history of the region is that many ‘Moriscos’ (Moslems who were forced converts to Christianity) came to Ronda to hide out in the 17th Century; their sincerity was questioned and they were suspected of practicing the religion of their fathers in secret.  Why would you doubt the sincerity of someone whose family had ‘converted’ after being told, “Convert, be executed, tortured, or exiled” with what you can carry, no money or jewels, from where your family had lived for six hundred years? One of the possible consequences was being thrown off the cliff. This was also practiced at the start of the Spanish Civil War in 1936 and written about by a young war correspondent in a book entitled “For Whom the Bell Tolls.”

While the numbers of Moriscos was probably larger than the numbers of ‘conversos’ (Jews who had been forced to convert), the Moriscos seemed to have had friends in high places so the persecution generally was less aggressive and the punishments less severe. Being thrown off the cliff may be ‘less severe’ than burning at the stake. I don’t know how they had managed to retain any political clout.

None of this inglorious history makes the views any less spectacular.

Where is the person who never looked over the 3rd floor bannister in City Hall?

El Puente Nuevo was built in the late 18th Century and is 120 meters, not quite 400 feet above the river.  It is the ‘New Bridge’ because it is a couple hundred years newer than the ‘Old Bridge’ and the ‘Roman Bridge’. The Old Bridge is from 1500s, built on the foundation of an older bridge. The Roman Bridge is older, but wasn’t built by the Romans. It sometimes called the San Miguel Bridge (where it goes, if anyone still went that way) or the Arab Bridge (who built it.) There may be bits of the foundation that date to the Romans. 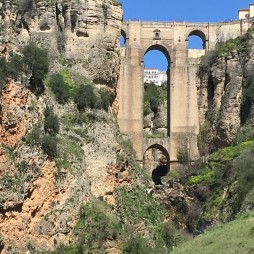 What else do I need to say?

We only had a couple hours after finishing lunch before we had agreed to meet up with Sergio. We didn’t really get into the town but Doré did manage to find a refrigerator magnet. First, we went to La Plaza de Toros de la Real Maestranza de Caballeria de Ronda. In other words, the bull ring. It had been built by the Royal Militia of Ronda, who still keep horses. This is the oldest bullfighting ring in Spain, opened in 1785. They still fight bulls here every August, in spite of being a small market.

Even with, or because of, the English ‘translations’ in the museum, I’m a little confused but fighting bulls on foot (I mean bullfighting on foot) was apparently outlawed in the 14th Century, when the area was under Moslem control. I doubt if that was done for the benefit of the bulls and certainly not the horses. In spite of the ban, or perhaps because of it, the tradition did not go away. It was eventually un-outlawed under Christian rule.

As a complement to my on-going struggles with the English language, part of my on-going struggles with or enjoyment of the Spanish language (I should say ‘Castellan’), a bull fight is ‘la corrida de toros,’ which is translated as ‘the running of bulls’ although corrida is not the present participle of corrir. They never say ‘peleando o luchando de toros,’ which might be ‘fighting of bulls,’ since they don’t like using verbs as nouns. They will often say ‘la fiesta brava’, where ‘brava’ does not have an English cognate but can be something like ‘fight’ or ‘dispute.’

The bull ring itself is visually powerful. The ring is 66 meters in diameter, with two levels of seating and dozens of arches supporting the roof. Not big enough for football of any type, but they do sometimes use bull rings for tennis.

OK, so this wouldn’t inspire awe in NFL-paid announcers like US Bank Stadium does but it will all still here long after US Bank implodes. I’m talking about the buildings.

I’ve never seen a bullfight; I’m glad I’ve never seen one, but I can tell you any night, I’d rather see than be ‘n one. The chief matador on opening day was Pedro Romero, a locally born superstar. He reportedly had a career record of 5600 wins and zero losses. Fifty six hundred is one a day for 15 years, but it was probably more than one on the days he did work. His son and grandson were also celebrities in the family business.

However, it is impossible for this foreigner to appreciate the fascination or significance for the culture. For the 5600 bulls, with a combined record of zero and 5600, it’s probably no worse than a packing plant. No one who eats pigs’ ears and fish heads is going to waste a side of beef.

(“If God didn’t want me to eat animals, He wouldn’t have made them out of meat.” South Dakota bumper sticker)

The ride home took just over an hour and dropped us at our door, in time for coffee before the nap before dinner. We shared a mixed vegetarian platter.

One thought on “Ronda, Málaga, Andalucía”