El Museo Carmen Thyssen was the first museum we visited when we got to town two months ago. Now it has a exhibit of Gustave Doré, so we redux. Paul Gustave Louis Christophe Doré was a very proficient and prolific 19th Century painter and illustrator, who is best known for his illustrations for “La Grande Bible du Tours” and “Complete Fairy Tales.” The former is often referred to as the ‘Doré Bible,’ at least in Doré’s family, and the later post positively as ‘The Brothers Grimm’ by almost everyone.

The print above is ‘Jesus in the Synagogue’ from the Bible collection. I downloaded it from Gutenberg, which has the entire Bible available for notebooks or mobiles. The illustrations are at  http://www.gutenberg.org/files/8710/8710-h/8710-h.htm

In the late 19th Century, Doré was the go-to guy for illustrations. He did editions of Byron, Cervantes, Dante, Shakespeare, Milton, Poe, Rabelais, Hugo, Balzac, and the list goes on with less well-known authors. He hadn’t finished Shakespeare when he died. (And neither will I.)

He worked in a variety of media (oil, etching, illustrator, caricaturist, comics, sculpture) but, for illustrations, it was wood cut engravings. Strangely, these are remarkably durable, compared to etchings on metal. Apparently, they were reasonably quick for Doré to produce. Many of the books had dozens of illustrations; some, like the Bible, 100s.

These are not part of the exhibition we saw.

We are in Spain: The Carmen Thyssen Museum exhibition of Doré’s work is entirely illustrations of Spain that he did for a book, written by a Spaniard, Baron Charles Davilliers, entitled, “L’Espagne”, probably also in Spanish, “España,” but certainly in English, “Spain.” The book is a chronicle of the travels of Doré and Davilliers around Spain in the 1860s.

While most artists at the time were presenting rather romanticized images of Spain (to sell in Paris), the ¡309! wood engravings that Doré did for the book were very realistic images, often copying photographs precisely. Photography was the break-through technology of the day and had to have made Gustave’s job much easier. Otherwise, he would have been working from sketches and memory. I don’t think you can sit in front of a building and do a wood cut. 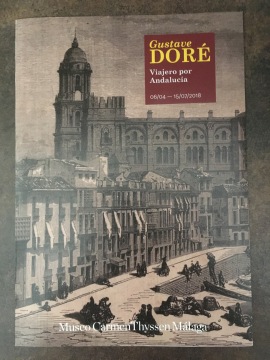 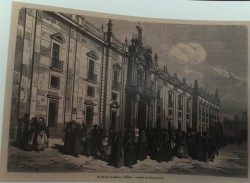 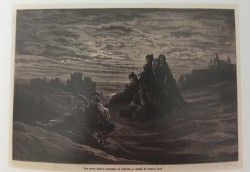 Like most temporary exhibitions, photos are not allowed; probably copyright issues. These are lifted from the exhibit guide or Wikipedia. 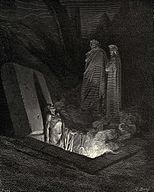 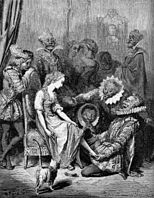 According to Thomas Doré, of Crystal Lake, IL, there is no discernible connection between the Dorés of Illinois and Gustave Doré of Strasbourg, France. The Dorés of Illinois trace back to the Dores of the Isle of Wight, which is not all that close to Strasbourg; but they may be cousins in the Middle Ages. Strasbourg is in Alsace on the border with Germany; that border, to put it weakly, has been revised on a number of occasions. On those occasions, Alsace was a good place to be from and the Isle of Wight may have been far enough.