If you want to know about the start of Semana Santa (Holy Week) de Málaga 2018, you’ll have to go to Doré or Ron’s FaceBook page. There were nine processions today (Palm Sunday) starting at 9:30 am and going until 1:00 am Monday. As of this writing (Sunday, 21:30 pm), the souvenir of choice for boys nine years and less seems to be a drum; I cannot address the question of how many will make it home.

Le Centre Pompidou, Paris, was initiated by Georges Pompidou in 1977. The Málaga version is the first branch outside of France. The deal was cut in 2014 and was to end in 2020; the contract, in the last couple days, was extended another five years to keep the doors open until 2025. Because the Center is temporary, it has no permanent collection; everything almost is on loan from Paris.

The focus is modern art, in multiple disciplines: painting, sculpture, architecture, video, dance, from the Twentieth Century and later. The current exhibit is “Modern Utopias;” the audio guide was almost entirely long statements from modern artists about “what Utopia means to me.”

The word is another “Greek” word (like Pandemonium) that was made up by a non-Greek English writer. The early humanist Sir Thomas More used it as the name of a nonexistent island in his book Utopia, from ‘oú’ (not) and ‘tóttoc’ (place). Another perfectly good English word created from Greek pieces is ‘eutopia’, which uses the ‘eu’ prefix meaning good, as in eulogy and euphemism. Somewhere along the meandering 500-year path of English from the 16th century, utopia (i.e., no place) has taken the meaning of eutopia (i.e., good place). Perhaps because More’s humanist not-a-place sounds like a good place to live, but more realistically, it was because the English word ‘utopia’ sounds like the English word  ‘eutopia.’

I can’t accept the interpretations that “no place is a good place” or that “a good place is no place.”

That was probably more than you wanted to hear, too.

Since the artists didn’t attempt to explain their art, I won’t either. I think Dali said something like just because I don’t know what a painting means while I’m painting it doesn’t mean it has no meaning. And Picasso something about the critics trying to understand and explain ‘as though understanding were important.’ Neither of those are part of the “Modern Utopias” exhibit.

The rather idyllic painting by Picasso of a goat in a garden (that’s not quite the name) was done in 1956, while the Soviet suppression of the Hungarian Revolt was happening. Many artists, who had been dreaming of a socialist utopia, renounced any association with communism; Picasso did not. He had joined the French Communist Party just after WWII and kept his membership for the rest of his life.

For a couple biographical footnotes, the Fascist Franco regime controlled Spain for much of Picasso’s life and Picasso stayed in Paris during the Nazi occupation. He was questioned multiple times by the Germans; when asked if  ‘Guernica’ was his work, his response, so the story goes, was, “No, it’s yours.”

Somehow he managed to avoid being arrested. Given the restrictions the Soviets put on artists (see Museo Ruso,) I suspect they wouldn’t have been quite so tolerant, even of a Picasso. 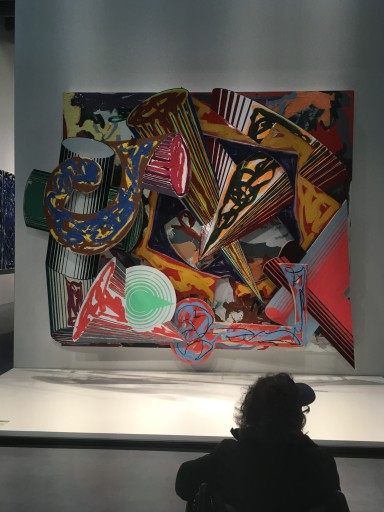 This is a picture of Doré looking at a non-Picasso painting (or construction or something; oil on plywood.) It is Picasso-esque because, if you cross your eyes to get a 3-D image, Doré is shown in two profiles.

To describe a little and explain even less:

Cute nearly life-size sheep, some without heads that could serve as benches;

Curious greater than full-sized full-size bed in a sardine can;

And inside the glass cube that is almost the only part of the Centre visible from street level. The cube has very quickly become iconic of Málaga, almost as iconic as La Farola, the Lighthouse with a 3+1 pattern repeated every 20 seconds, which has been there for 201 years.