Mérida is a very old Spanish city and an even older Mayan city. Now it’s an old Mexican city. Mérida of course is the Spanish name and if you include all the Mayan cities, T’hó  or Ichkanzihóo or Ichcaanzihó, it is the oldest continuously occupied city in the Americas. The Mayans have probably been here for 3,000 years and the Europeans for 600.

Many buildings date to the 16th and 17th Centuries. The cathedral (first three pictures below) was built on the foundation of a Mayan temple using stones from the original temple. The fourth picture is la casa de Francisco de Montejo, who was one of the original conquistadors, aka, the “lieutenant.” There was also Francisco “the son,” and Francisco “the nephew.” What were our ancestors building in Norte Americana in the 15th Century? 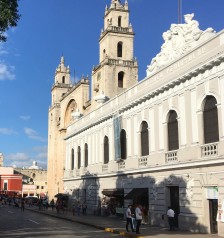 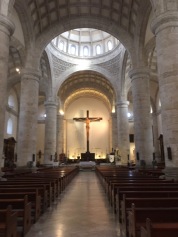 While coming into Mérida on the bus (four hours across the Yucatán) and taxi, the city felt like many Mexican towns away from tourist areas: lots of piece-meal building either under construction or demolition (hard to tell), and lots of small cars, trucks, motorcycles, bicycles, dogs, and kids. We were wondering what we had gotten into this time.

After three very pleasant days, our first impression was only half right. It is a modern city with all the restaurants, museums, theaters, parks, plazas, and problems one would expect of a city with almost a million inhabitants. Many of them ex-pats, some of whom manage to live here year round. It gets hot.

As you step inside, the world changes. These pictures are inside Pete and Norma’s: looking from the dining room toward the front; looking from the living room toward the back, and the “back yard.” The lighted area between the arched doors is open to the sky. If it is raining, you will get wet going to dinner. Not shown, on the right, are the kitchen, two bedrooms, two bathrooms, and the upstairs suite (outside stairs up by the pool). 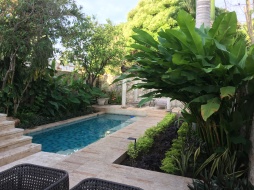 Many of the older homes have been rehabbed but there are some restrictions that cause many Norte Americanos to build new on the north edge of town. First, you aren’t allowed to appreciably change the appearance of the street side but that seems to be the only official restriction; if you want to convert your house into a store, bar, restaurant, or rope factory, they have no problem with that. It’s actually very convenient; you can find very nice little restaurants tucked in anywhere.

The second restriction is more serious; that is the stone construction, which makes updating the plumbing or electrical a bit challenging. You make accommodations; don’t expect an electrical outlet every eight feet. Somethings take getting used to, e.g., toilet paper doesn’t go into the toilet; I’m sure city engineers everywhere would support that. This house required remarkably few accommodations from these gringos mimados.

We spent most of our time in the oldest part of the city. The houses built by the henequen millionaires would put to shame the McMansions of Edina and Minnetonka. The first two below were built side-by-side for one man’s two daughters. They are identical except one is a full three stories and the other two story and a half. Maybe she wanted a third floor terrace (apparently not worried about the terrace floor leaking.) 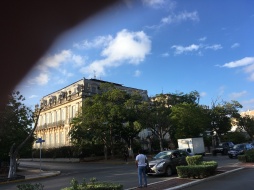 There were blocks and blocks of these. One can only imagine what you would find if you stepped inside. Most are now boutique hotels and event centers.  It is remarkable how you can succeed in business if you don’t have to pay your workers and feed them just enough to keep them alive and working.

Wednesday we spent at the el Gran Museo de Mundo Maya de Mérida, which focused on the Mayan culture and contributions. Like most “primitive” societies, they had an understanding of nature, mathematics, and astronomy that would put most “educated” adults today to shame. This knowledge had very practical application for knowing when, where, and what to plant and for knowing when, where, and what sacrifices were required to keep the gods on their side. Such knowledge, of course, was less universal than today, primarily restricted to nobility and their advisors. 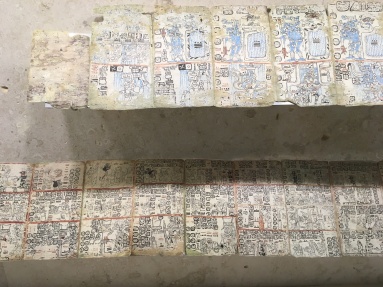 Pages of a Book (enhanced)

Their writing, like Egyptian hieroglyphics, was cumbersome; primarily carved in stone. Even the pages of the book above were done on animal skin covered with a thin layer something like concrete. While that was wet it was easy to write on or in. But not the sort of book you would pick up at the airport and read on the beach.

The font contained both the large fantastic jaguars, snakes, elephants (?) that usually represent rulers and memorialize their exploits but also smaller symbols that remind my inexperienced eye of the “linear A” script used by the Minoans on Crete.

There are a lot of ancient Mayan sites and artifacts in and around Mérida, but the locals are still making more. Not sure whose exploits this memorializes.