The Canal was built (1859 to 1869) by the French with significant cost overruns and loss of life, mostly from disease.  It shortens the distance between the Far East and Europe by 4,300 miles but of course it makes a difference if you are talking about the distance to Greece or the distance to Portugal. Originally, it was just over 100 miles long; now it is about 120 miles long. Originally, the channel was 25 feet deep; now more like 75. It cannot accommodate the largest supertankers, more because of the width and twists of the channel than the depth. I understand how you make a canal deeper; it’s less clear how you make it longer. 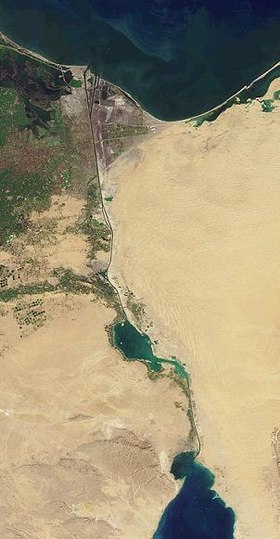 I didn’t take this photo

There are no locks because the Red Sea and the Mediterranean are pretty much the same level and no mountains to get over. However, water tends to flow from the Great Bitter Lake (about a third of the way through from the south) to the Mediterranean in winter and the other way in summer. South of the Bitters, it flows with the tides. Until very recently, the Suez was one lane with passing areas in the Great Bitter Lake and the Ballah Bypass.

Since 2016 when the Ballah Bypass expansion (maybe a third of the way through from north to south; maybe a bit more) was completed, it became less one way by allowing a larger passing area and more efficient use of the East Container Terminal. This project about doubled the capacity to nearly 100 ships a day.

Toll is mostly based on tonnage; last year the average toll was about a quarter million US dollars, which is a significant source of revenue for Egypt through the Suez Canal Authority (SCA). It is open to all ships in war and peace regardless of flag. The priority is warships, passenger ships, and cargo ships. The regardless of flag part is remarkable when it was constructed as well as in today’s world. The British opposed building the canal and one of the diplomatic tactics they used was to get implemented a restriction that forbade the use of forced labor (slaves.) By the time, the canal was finished not even the USA allowed forced labor.

In spite or perhaps because of Britain’s opposition to the canal project, the first ship through was the Royal Navy’s HMS Newport, which had sneaked ahead of the French ship L’Aigle in the dark, which was supposed to be first. The third ship through was British P&O liner Delta. If you can’t fight them, …

Yesterday, there were two convoys going north and one going south. We were second in our line behind a warship (I don’t know whose) and followed by cargo ships (I don’t know how many.) We entered the canal about four in the morning and passed Port Said about two in the afternoon.

There is not much but sand on the Sinai side; a few scattered developments but not many people live there as far as we could see. The Egyptian side is a bit greener and more developed. There were a lot of ferries going back and forth, mostly carrying trucks, with long queues. There are plenty of security checkpoints, sentry boxes, berms, and walls on both sides. Occasional small fishing boats were dodging our convoy. By small, I mean two men, one spreading a net, and one manning the oars.

I saw two bridges (I didn’t watch the entire ten hours). One large new one is near Port Said, optimistically or ironically or sarcastically named the “Freedom Bridge” (probably more Orwellian) and an older one in the area of the Ballah Bypass. The new one is high enough to accommodate anything that will fit through the canal. The older one is a railroad (I think) swing bridge. It is now the bridge to nowhere because it only crosses one of the two channels.

The success story of the Suez was the reason the French undertook building the Panama Canal, unsuccessfully. The Suez is a really big ditch through desert sand. The Panama Canal is rather different and so were the results.

Watching the sand go by is slightly more exciting than watching waves go by in the open sea, but that doesn’t stop us from doing either.