The name of the island is Rapa Nui; the people who have inhabited it for the last 1200 years or so are the Rapa Nui; and the language they speak is Rapa Nui. The Dutch, when they came across it on Easter Sunday, 1722, called it Paaseiland (English translation Easter Island). Chileans, who took it over in 1888, call it Isla de Pascua and the people pascuense. It has a population of about 10,000 people of which 4,000 are Rapa Nui, almost all the others Chilean immigrants.

At one point, after the Europeans arrived, the native population was down to 110 individuals. All 4,000 current Rapa Nui descended from those 110 people in seven generations.

The island’s claim to fame are the moai, which are statues hewn from volcanic rock 10 to 40 feet tall. They are not just heads but more or less complete bodies with over-sized heads. While anthropologists have long puzzled why they all (almost) face inland rather than out to sea, the Rapa Nui know, or at least our Rapa Nui guide knew. Europeans thought facing out to sea would make more sense to protect against outside invaders, but the natives weren’t that worried. The nearest inhabited land was Pitcairn Island, about 1300 miles away.

The statues aren’t gods but represent individual ancestors. They are in effect family grave stones and look toward the village where the family lives. There is one group of seven moai that is the exception. They look out to sea, westerly toward Tahiti, which according to Rapa Nui oral tradition is where the original group of seven people came from. So they aren’t actually looking out to sea but rather toward their home.

Before the Europeans, the Rapa Nui worshiped no gods but revered the ancestors. This let them avoid some customs of their “nearest” neighbors, like human or animal sacrifice. Both human and animal lives were too important for survival to waste any of it.

While northern hemisphere scholars have much debated where the original settlers came from, once again the Rapa Nui have always known: they came from Tahiti. Thor Heyerdahl with his book Kon Tiki popularized the theory that they came from South America. There were two bits of evidence that support this and voyage of the Kon Tiki demonstrated it was theoretically possible. There are reeds growing in the fresh water crater lakes on Rapa Nui that are native to South America and sweet potatoes, also native to South America, are an important part of the diet. There clearly was contact of some form.

However, the Rapa Nui oral history describes canoes from the west. The language is Polynesian in origin and DNA now conclusively connects the Rapa Nui to Tahiti, Hawaii, and New Zealand, not to the Incas or their predecessors. And why else would the group of seven be facing west rather than east?

With the smallest moai weighing several tons, there has been much debate about how they were moved from the quarry several kilometers to their final locations. Current thinking is they were quarried, carved, and “walked” upright. There is a BBC documentary demonstrating how this might be done with ropes near the top of the head, with rather small groups of people left, right, and behind carefully rocking the statue back and forth. There is also an oral tradition about the statues “walking.”

There are several examples that fell over before they made it all the way. While the routes were generally flat, the fallen moai that landed on their faces are on down slopes and those that landed on their backs were on up slopes. These examples were also slightly different shapes than the ones found in place. The fallen have more rounded bases and are more pot-bellied. The speculation is that these differences gave them a lower center of gravity and made them easier to rock and walk, and the final shaping was done after they were in place. Seems plausible. 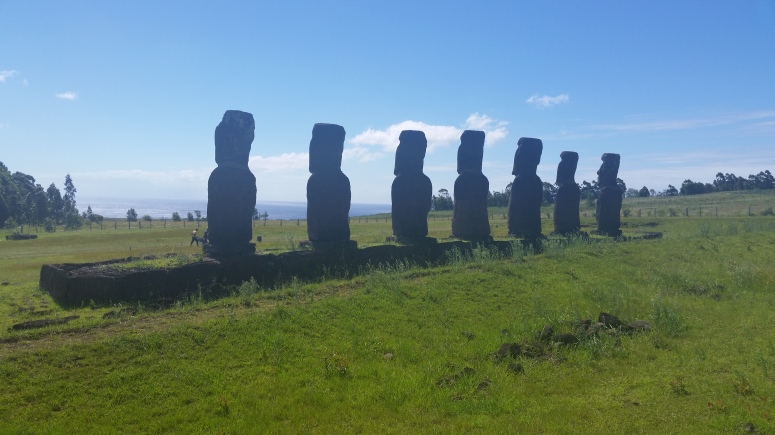 While the moai are the reason we know about Rapa Nui (aka Easter Island,) it is an island in the south Pacific. It is surrounded by the same blue water, sunshine, and sea life that we associate with Tahiti and Bora Bora; just no famous artists in residence.

Apparently, we were somewhat lucky to get on the island at all. There is no harbor close to deep enough for even our relatively small ship, which meant we had to use tenders (which double as lifeboats) with a fairly dicey transfer in relatively open water; Doré did not enjoy that part. Many ships including one that was there a day ahead of us didn’t try it.

But before we got to that point, we had to clear customs. That happens everywhere and usually takes about half an hour, occasionally as much as an hour. This time, it took over an hour before the customs officials found time to come out to the ship (we were the only ship there.) And another three hours before they were satisfied that we were safe to disembark. Chile is very strict about bringing in anything biologic but many other theories have floated around the boat that reflect less favorably on the process.

That delay shoved all the excursions back four hours and our departure back three hours. Then as they pulled up the anchor, there was a broken anchor chain three or four meters long tangled with ours that had to be untangled. Twelve feet of that chain takes more than a couple guys in a rowboat to move. Another hour delay.

All in all, it was a spectacular day. And then it was Doré’s birthday. 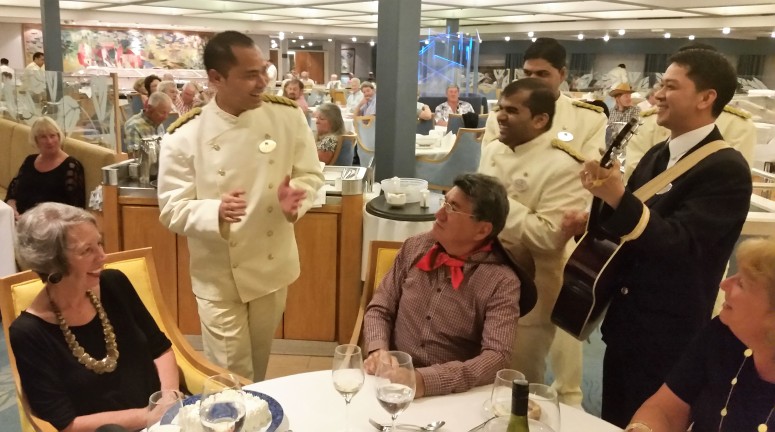